People with disabilities have told the Southern District Health Board they object to being left out of its long-term health services plan.

The objection was raised at a consultation meeting last night at the Dunedin centre on the 10-year Southern Strategic Health Services Strategy. 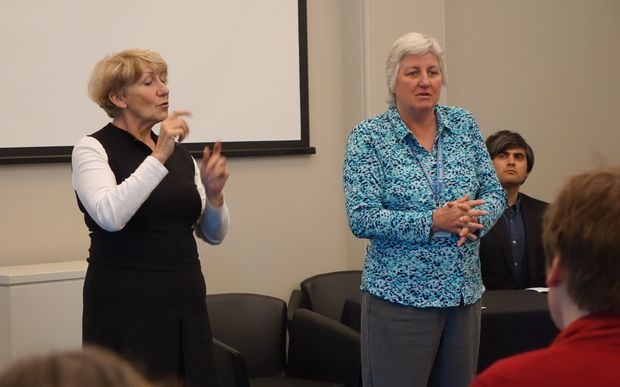 The DHB has held 16 such meetings in the past month throughout Otago and Southland.

About half of the 20 people at the Dunedin meeting were deaf or live with some other impairment.

A spokesperson of the Disabled Persons Assembly, Chris Ford, said services for people with disabilities are barely mentioned in all the long documents produced and their needs should be taken more seriously.

"There is a real need for disabled people and our issues to be fully acknowledged," he said.

Others asked through a sign language interpreter why they were left out and how spending priorities between services like audiology and cardiology are decided.

One man pointed out that the DHB could have trouble getting up-to-date statistics on deaf people, since that question was left out of the last census.

The Dunedin president of the Disabled Persons Assembly, Phyllis McPherson, said they have been badly left out of the plan and the DHB had to do more.

"There are non-verbal people whose support workers are having to go into hospital to support them, but it is not their role. It should be the health system's role", she said.

The DHB director leading the plan's development, Pim Allen, said the omission of disabled people is concerning and will be rectified.

"They made the point very well that there is not a public health act, but a disability act and we have responsibility for both", Dr Allen said.

Others at the meeting asked how the DHB would get itself out of deficit without cutting services and urged the board to push for more income by getting the national population-based funding system changed.

And it was surprising that in a city which has talked so much about needing Dunedin Hospital rebuilt, there was only one question about it. It perhaps showed many people have found it hard to connect the high-level strategy with what it will really mean for their local health services.

In 16 meetings all over Otago and Southland, fewer than 300 people attended and a third of those were in Queenstown. Even so, the DHB said it was satisfied.

Dr Pim Allen said everything would be taken into account, but no-one had pointed out glaring holes or fundamental problems with the plan's six main pillars.

The long consultation closes on Friday.

The DHB aimed to give its board a redrafted version by February and start implementing the plan later in the year.