A new row has erupted between doctors and the debt-plagued Southern District Health Board (DHB).

The DHB has today released a draft 10-year strategic plan as it proposes to re-organise services so it can live within its means. But a claim in the report that the DHB would be in surplus if not for a rise in medical personnel costs has got senior doctors fuming. 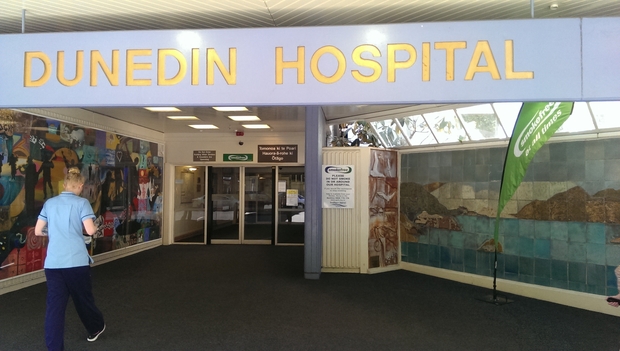 A $250 million upgrade is planned for Dunedin Hospital. Photo: RNZ

The Southern DHB had a debt of $17.8 million at the end of June this year - a debt it intends reducing by $3 million this financial year.

The DHB is the largest nationwide in terms of the geographical area covered - a lot of it remote - and hopes to undertake a $250 million upgrade of Dunedin Hospital.

The draft plan said the DHB had delivered financial deficits each year since its establishment with the merger of the former Otago and Southland DHBs in 2010.

It said there was widespread recognition that cycle needed to be broken but to achieve break-even against forecast revenue by 2020-21 would require the DHB to restrain growth annually (compounding) by 0.219 percent.

The plan outlines the challenges facing the DHB as including slower-than-average population growth for the region, at 4 percent as opposed to 6.2 percent, with growth in centres such as Queenstown and population decline in other areas, including Gore and Invercargill.

As well, some specialised services are struggling to maintain activity volumes and staffing levels required for clinical viability - a situation not helped by a lack of patients from other areas.

The plan said the DHB was delivering more care per person than other comparable DHBs in some areas, notably community pharmaceuticals and resthome beds for those over 65.

It said a sustainable health system was needed to meet the needs of the resident population and visitors, and it would involve providing more care in the community, at rural hospitals and using teleconferencing and other IT developments.

The report said personnel costs comprised a significant proportion of district health board costs, and singled out medical personnel costs. It said these had risen 41 percent during the past five years.

"Further, more detailed, investigation is required to ascertain why SDHB has not restrained medical FTE [full-time equivalent] cost growth relative to the large DHB average growth rate between 2009 and 2014. If cost growth had been restrained then the DHB would now be generating a surplus, other things being equal."

Association of Salaried Medical Specialists executive director Ian Powell said the comments were based on data which had been used out of context.

"What the DHB's mis-leaders are doing, in effect, is pointing the finger at their doctors and saying they're to blame for the DHB being so deeply in the red," he said.

It would add to difficulties between doctors and the DHB at a time when morale was low and doctors' input was needed to help the organisation re-organise services, Mr Powell said. Last week, doctors accused the DHB of an obsession with the deficit, something they described as intensely frustrating and causing them to quit some clinical leadership roles.

The draft plan was done by the Health Partners Consulting Group with input from a wide range of groups, including the University of Otago, the polytechnic, and community and primary care leaders.

Southern DHB chief executive Carole Heatly said she would travel throughout the region during the next month explaining it and seeking public feedback.

"This plan will be our touchstone for everything as we move forward over the next three, five, 10 years. This will be our framework to develop and change things as we move on. It will help us become much more efficient."

Feedback closes on 21 November and the DHB board is expected to make a decision in February next year about whether it should be adopted.

A community health expert in Southland says a new plan for health services is sound, but implementing it could pose challenges.

The Southern District Health Board proposes providing more care in the community and boosting the role of rural hospitals.

Ray Anton, the chief executive of a hospital and health centre in Balclutha, said it is the right approach.

"I believe it's the right solution. I believe it's being done in other regions and done successfully. I think there are ways of making it happen, gradually to show success and build on that success. So I'm optimisitc that it could be done. Are there challenges? Are there going to be politics? Absolutely."

Mr Anton said the challenge would be making the right funding changes, which has been achieved in Balclutha.