About 250 people turned out in the central Hawke's Bay town of Waipawa last night for a meeting billed as "now or never" for farmers to sign up to buy water from the proposed Ruataniwha water scheme. 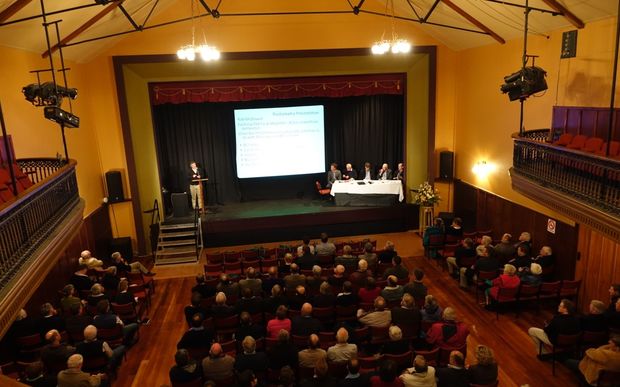 It was not just farmers who showed up to the meeting, with the audience including members of Parliament, environmentalists, Hawke's Bay regional councillors and opponents of the dam project.

The central issue of the meeting was the requirement for the regional council to sell 40 million tonnes of water before construction of the dam could begin, which had not yet been achieved.

The meeting was organised by Federated Farmers and Irrigation New Zealand, and the message delivered to the audience of mainly farmers was that irrigation was a "game changer".

One of the speakers, Rad McDowell, who runs an irrigated farm near Ashburton, told the meeting that while irrigation looked expensive, it also significantly increased returns.

"A key benefit we've found is in cutting out the dry years. It's the dry years that kill you and its being able to eliminate those.

Another speaker, Hawke's Bay farmer Arthur Rowlands, said irrigation offered options for the future and security to get through dry years.

He said many farmers he spoke to in Central Hawke's Bay wanted to join the Ruataniwha scheme but there were some issues with water contracts that need to be sorted out.

"I think very few have signed up yet because there's still some technical issues to be worked out yet before we can actually sign the dotted line.

"I'm ready to sign but we have to sort those things out first," he said.

Green Party water spokesperson Catherine Delahunty told the crowd that while the meeting talked about how irrigation benefited farmers in Canterbury and Otago, those schemes were different to what was proposed in Hawke's Bay.

She said the South Island schemes were owned by farmers, but farmers would not have shares in the Ruataniwha Water scheme.

"So there weren't a lot of parallels between the farmers who spoke from the South Island tonight and what's proposed for this area," she said after the meeting."

Ms Delahunty said the meeting had no context, in that it did not mention environmental effects of intensive agriculture from water schemes on water bodies such as rivers.

Fish and Game New Zealand Chief Executive Bryce Johnson said the meeting was clearly designed to sell the dam to farmers, but a more balanced public meeting was needed where a range of views could be expressed.

"There is competing economic evidence in different directions to this and that simply wasn't given an opportunity to be presented," he said.

Apart from not having enough farmers committed to buying water from the Scheme, the Ruataniwha Dam still did not have any major institutional investors after Trustpower and Ngai Tahu pulled out saying the rate of return was not high enough.

Resource consents for what would be New Zealand's biggest irrigation dam holding over 90 million tonnes of water had not been finalised and would be the subject of a High Court challenge later this month.