The father of a woman whose river boarding death prompted tougher safety regulations for adventure tourism, says the new registration system is too soft on operators. 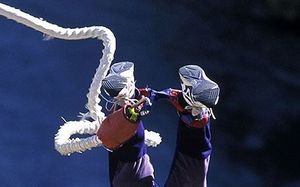 From today, adventure activity companies must have completed a safety audit and be registered by Worksafe New Zealand.

Just a quarter of the 348 companies have met the deadline, another 199 have been given an extension until December.

Chris Jordan campaigned for tougher rules after his daughter Emily drowned in a river boarding accident on the Kawarau River in 2008.

He said operators who had not met the deadline should not have been given an extension and instead should be shut down until they are registered.

"They should have been registered one, two years ago if they take safety seriously, why has it taken them this long to get to this point?"

"They should be closed down until they prove themselves safe."

Worksafe chief executive Gordon MacDonald said inspectors would be checking others who might be offering adventure activities illegally.

"This is all about the professionalisation of the industry, making sure it has the systems in place. That doesn't stop with a 1 November or 1 December deadline, that process continues.

"But I'm sure overall that will improve the level of safety across the industry."

Mr MacDonald said illegal operators faced immediate fines and, if prosecuted, they could be fined up to $250,000.