The daughter of a Canterbury couple who escaped the snowstorm in Nepal's Himalayas says it is not the first time her mother has dodged death. 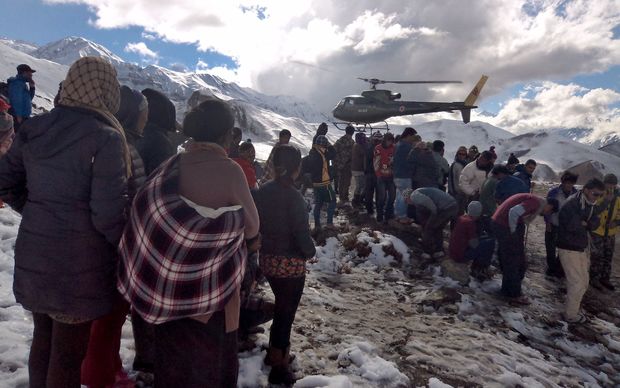 Peter and Elizabeth Cammock were trekking in the area where at least 40 people have been killed, and nearly 400 people were rescued from the Annapurna trail.

Alice Cammock and her two brothers have since had email contact from their parents confirming they are safe and carrying on with their hiking holiday.

Ms Cammock said her mother was a survivor of the CTV building collapse in the February 2011 Christchurch earthquake, and this situation was all too familiar.

She said they were incredibly lucky to have their mother, and she felt sorry for the people who had lost loved ones in the Nepal tragedy.

Meanwhile, rescue teams in Nepal said that there were now no trekkers left stranded after completing their search for survivors of a devastating Himalayan storm.

The focus now was on recovering bodies buried in the snow, a government spokesman told the BBC.

It was unclear how many people may still be missing in the country's worst-ever trekking disaster.

It is the fifth day that Nepalese army and private helicopters have been searching the trail. 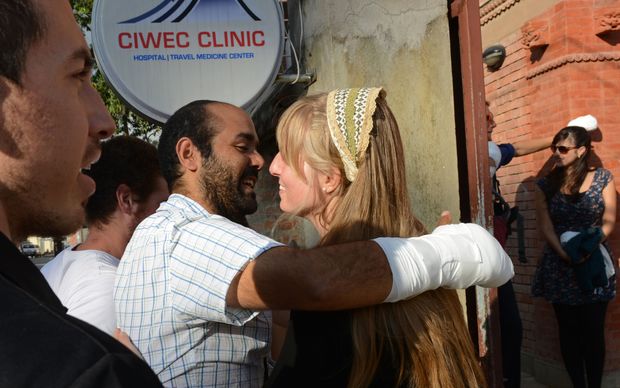 An Israeli Himalayan snowstorm survivor, treated for frostbite, talks to compatriots after being discharged from a hospital. Photo: AFP

Officials say the rescue effort grew harder on Sunday because of worsening weather.

The BBC's Andrew North in Kathmandu says that in addition to finding bodies, the authorities are eager to improve the flow of information on those caught up in the disaster.

There are currently three different lists of the dead and survivors, being run by the army, the home ministry and Nepal's trekking association, and some people may have been counted twice. The authorities say they now want to create a single list.

Nepalese, Japanese, Israeli, Canadian, Indian, Slovak, Vietnamese and Polish trekkers are said to be among the dead.

Many survivors have been left with severe frostbite and will have to have limbs amputated.

A trekking expert told the BBC that the storm, which struck on Wednesday, was the worst in a decade, and saw up to 1.8m of snowfall in 12 hours.