The son of a Canterbury couple trekking in Nepal faces an anxious wait for word of his parents. 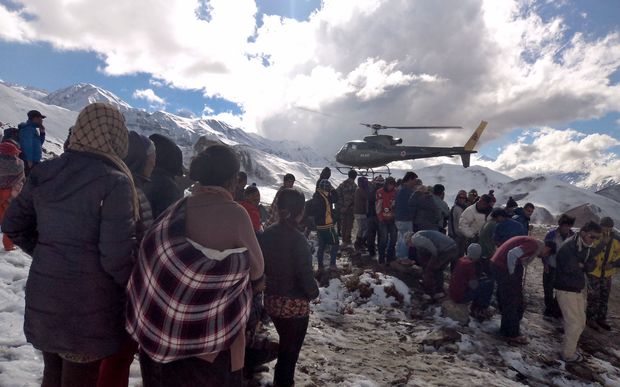 At least 29 people died when a blizzard brought down avalanches on trekkers in the Anapurna region.

Others are missing and over 150 have been rescued.

Mike Hammock said his parents, Peter and Elizabeth Cammock, were trekking in the region and would have had to go over the pass where most of the fatalities happened.

But he said he believed they were some distance away at the time of the disaster and were probably just out of contact in a remote region.

Mike Cammock said his parents were expected to come out of the region in mid-November and he faces an uncertain time until he finds out more.

He said he had no reason to believe they had been harmed, but he was still concerned and felt slightly guilty about hoping his family was fine when so many others have lost their loved ones.

Peter Cammock was a Canterbury university academic who recently retired after 30 years on the faculty.

His wife Elizabeth is a survivor of the collapse of the CTV building in the 22 February earthquake in Christchurch.

Meanwhile, searching has been continuing in Nepal.

Mountain rescue teams, helped by clear weather and armed with shovels, ropes and ice axes, have been scouring an area buried under snow up to four feet deep for 10 hikers still missing.

The nationality of the others has not been confirmed.