Much of the North Island looks set to miss the best of tonight's so-called Blood Moon, a type of eclipse which will not be seen again in New Zealand for several years.

A MetService spokesperson said the weather was set to scupper the views of many trying to get a glimpse of the moon's reddish tint. 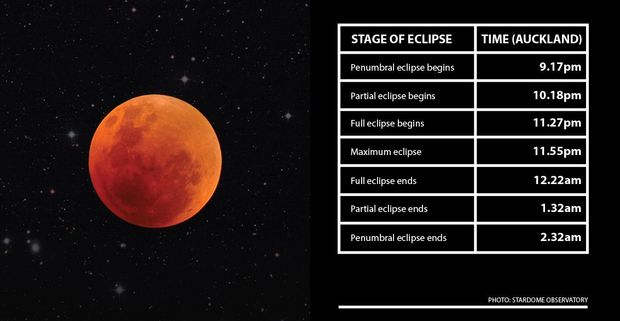 The eclipse is the second this year and, while shorter than one in April, would have been much clearer because the moon will be higher in the sky. However, poor weather has put paid to that, and New Zealanders will not get another chance to see a lunar eclipse like it until January 2018.

David Britten, an astronomy educator at Auckland's Stardome Observatory, said the eclipse would be almost an hour long.

"With a total lunar eclipse, as will happen tonight, the moon will go right through the middle of the earth's shadow.

"We will still be able to see the moon because some of sunlight sneaks around the outside atmosphere of the earth and filters out all the light except red light, a bit like sunset, and that red light will get to the moon and reflect off."

The observatory is recommending moon-gazers find a clear and dark location to watch what it says is a wonderful phenomenon.

"Even if it's cloudy, if you give yourself a little time for the cloud to part, even half a minute of seeing the moon like this is a spectacular sight."

Mr Britten said it would appear quite faint and not easy to see in places such as cities.

"If you think of the fact that we're standing on the earth, this shadow of the earth is stretching over a million kilometres out into space a bit like an arm reaching toward the room.

"Imagine if you're an astronaut on the moon during the eclipse facing the earth, you're going to see a solar eclipse. The earth's going to cover the sun up completely, it's a pity there are no astronauts up there to capture that sight for us."

Weather not looking good for many

MetService meteorologist John Law said the South Island's eastern coast was looking like the best place to try to see the Blood Moon.

"Sadly, the North Island looks to have a little more cloud lingering," he said.

Mr Law said there could be a few breaks in the cloud around Northland and Auckland early in the eclipse but it would thicken.

Wellington and Wairarapa would be the best North Island spots to see it, he said.

April's eclipse was the first total eclipse in several years. There will be another in April 2015 but it will be only minutes long, and one next September will not be visible in New Zealand.