A colourful lunar eclipse known as a blood moon was visible in New Zealand on Tuesday night, the first of four eclipses between now and the end of the year. 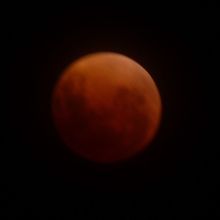 If you saw the lunar eclipse and would like to share photos, please email them to: iwitness@radionz.co.nz

The MetService had been forecasting rain for much of the country, but stargazers could snatch a peek of the phenomenon through any breaks in the cloud from about 7.10pm.

David Britten from Auckland's Stardome Observatory said by 7.45pm, the moon would start to turn red as it is struck by light passing through the Earth's atmosphere.

Listeners contacted Radio New Zealand on Tuesday night to say they had seen the red moon from various parts of the country, including Nigel Boniface of Masterton who managed to take a few photos before the clouds rolled in.