Lifeguards in the Bay of Plenty will search the Mount Maunganui area twice a day in the hope of finding a missing five-year-old boy, despite police scaling back the operation.

The Mount Surf Lifesavers club joined Land Search and Rescue, and divers from the Navy and police in looking for Jack Dixon, who was swept away by a large wave during a trip to Shelly Beach with his family on Wednesday.

Surf lifesaving volunteers have been organised to comb grids of the Mount Maunganui coastline at 9am and 4pm every day until next Friday. Five of their boats and 10 crew searched for the boy today.

Because of the length of time, and after speaking to the Dixon family, police have decided to scale back the search, but today said they haven't given up hope of finding Jack. 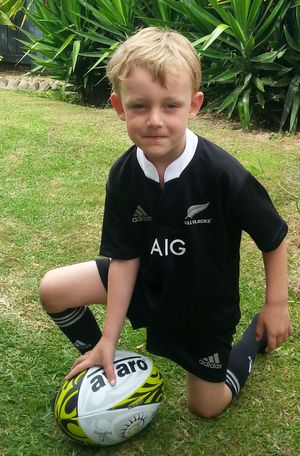 Jack Dixon was swept out to sea while at the beach with family. Photo: Supplied

The officer in charge of the case, Inspector Karl Wright-St Clair, said police would continue with their sea search, but not on land.

"We're not continuing because of the fact we have actually opened up the Mount Base Track. We know that over the weekend there'll be hundreds of people around the base track, and we'll have people in the area clambering over rocks and I'm sure that they will all be looking for Jack," he said.

"We'd really like them to keep an eye out for anything that may give us an indication as to where he might be. If they find him, or they find something of interest, they should immediately call the police, and try and preserve the scene as much as possible until our arrival."

Groups of people have been walking the base track of the maunga since it was reopened today, saying they consider themselves extra pairs of eyes for both the trained searchers and the Dixon family.

Locals told Radio New Zealand News they wanted to bring him home to his family.

"I'm looking everywhere, in the rocks, in the crannies, you know, and just always hoping that the sea will return that little boy."

"It would be nice for them to have their son come back for them to, you know, mourn him. It is truly sad, while he's all out there lost."

Naval divers have finished searching the area where Jack disappeared and were confident he was not there.

The region's lifesaving education manager, Leigh Sefton, said although police have scaled back the search, they would look where Jack disappeared from and also where it is likely he was taken to, taking into account currents and prevailing winds.

"As lifesavers, we've decided to continue those searches. We're going to do two lots of grid searching, morning and afternoon each day.

"Most of the time when we have had those sort of things before, objects and people end up over in that Matakana Island sort of area."

Mr Sefton said the swells seem to have settled down, but wind and rain could still cause problems.

About 80 people gathered in the cold and rain at Mount Maunganui last night, holding vigils for the missing boy.

People from Tauranga, and further afield gathered on the beach near the base of Mount Maunganui lighting candles for the boy.

One woman who attended the gathering said the vigil was to show solidarity with his family. "We're here as a community to support them and say that we're feeling their pain."

Another woman said such support would continue until his body was found. "It's going to happen until he's home."

Tauranga's deputy mayor Kelvin Clout was asking members of the public wanting to help in the search to be extra careful. He said he was very proud of the support the community had offered the Dixon family.

A Givealittle page had been set up for anyone wanting to make a donation "to assist the family with the costs associated with the search and for the many tough days ahead of them".

The Dixon family pledged to give a portion of money donated by the community to Surf Life Saving. 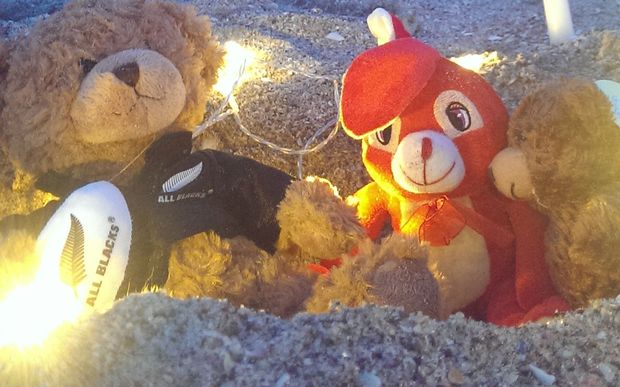 Toys have been left on the beach as part of the vigil. Photo: RNZ / Lauren Baker