It will now be several months before the world's largest operating tunnel boring machine is turned around and started again after it emerged deep from underground.

The machine, known as 'Alice', is now halfway through its task of building the Waterview motorway connection in Auckland. It took 10 months before it broke through - it started in the suburb of Owairaka 2.4km away.

The New Zealand Transport Agency says the tunnel which Alice has made has the 10th biggest diameter in the world, and it is also the country's longest road tunnel.

But it has another identical tunnel to make by heading in the other direction.

The drill's cutting head and three trailing gantries will be disconnected and, one piece at a time, taken from the completed tunnel and turned around. The parts will not be reconnected until early next year.

The tunnel boring machine is 90 metres long and weighs in at 3100 tonnes and its cutting head and shield are as high as a four storey building.

Project manager John Burden says the rotation will be "a big deal". "She gets pushed out of the ground onto a special cable that then gets dragged around by some large jacks ... it is a big job to pull her around and position her accurately." 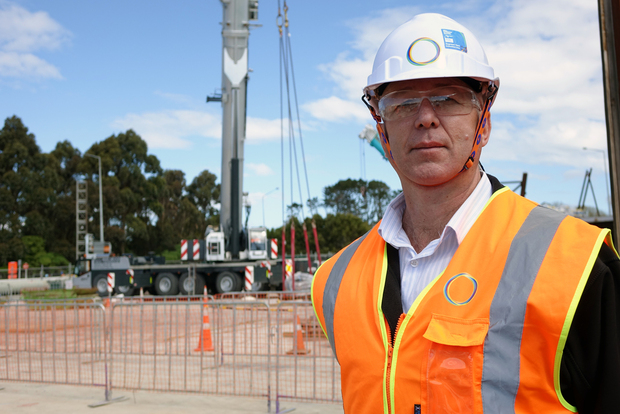 The completed tunnel and the one yet to be built form a $1.4 billion project. It will be a six-lane motorway linking the existing South-Western and North-Western motorways to help form the Western Ring Route. Vehicles will travel at up to 40 metres below the surface.

The project is scheduled to finish in 2017 because there will still be a year of work to fit the tunnels out after the second one is drilled.

The Waterview Connection is prioritised by the Government as one of its Roads of National Significance.