It has taken 10 months to push one side of the tunnel 2.4km from Owairaka to the western Auckland suburb of Waterview.

The tunnel will eventually link Auckland's south-western and north-western motorways as part of the six-lane Waterview Connection project and is set to open in early 2017.

Peter Spies from the Transport Agency witnessed the milestone today. "Absolutely exciting for all of us standing there. It's fantastic to see the machine come out of the hole exactly where it was expected to ... it was perfectly choreographed."

Mr Spies said Alice would now undergo the technically challenging process of being moved out of the hole and turned around to make the second tunnel back to Owairaka from Waterview.

The giant drill is 90 metres long, weighs 3100 tonnes, and its cutting head and shield are as high as a four-storey building.

NZTA's highways manager for Auckland, Brett Gliddon, said the tunnel's completion is a significant milestone for the $1.4 billion project to build the new 5km, six-lane motorway link from the Great North Road interchange at Waterview to Maioro Street in Mt Roskill and complete the long awaited Western Ring Route.

The drill's head and three trailing gantries will be disconnected and each piece taken from the completed tunnel and turned to begin work on the second tunnel in early 2015, expected to take until October.

During 2016, work includes the mechanical and electrical fit-out of the tunnels, including completing ventilation buildings and 16 cross passages to connect the tunnels.

The project also involves building the surface connections to the existing motorways, 9km of new cycleway, community amenities such as walkways, playgrounds and skateparks, and planting about 150,000 trees and shrubs.

The Waterview Connection is one of five projects to complete the Western Ring Route as an alternative motorway to State Highway 1 through central Auckland and across the Harbour Bridge, the NZTA says.

It is prioritised by the Government as one of its Roads of National Significance because of the contribution it will make to economic growth and sustainable development for Auckland and its regional neighbours. 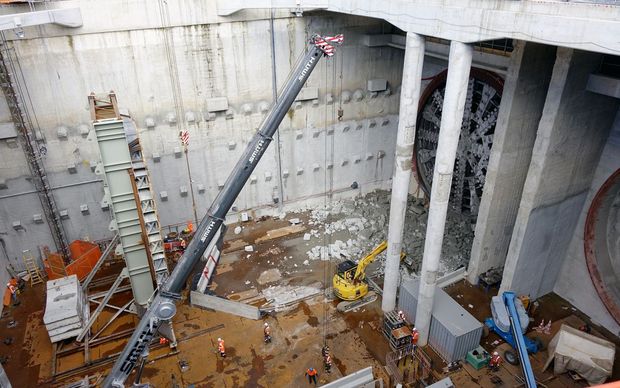 The tunnel is half complete. Workers have to dismantle the drill before it can bore its way back early next year. Photo: RNZ / Kim Baker Wilson