A passenger travelling to Auckland had a creepy experience recently when a large centipede was found to have crawled onboard. 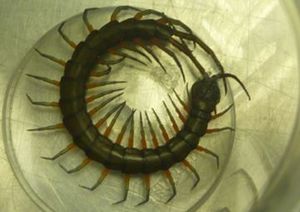 This centipede caused some commotion when it made its way on to a flight to Auckland. Photo: Supplied

The Ministry of Primary Industries said crew on a flight from Apia alerted them to an incident where a centipede crawled up a first-class passenger's leg.

A spokesperson said the passenger brushed the centipede off, which then caused some commotion as it scurried away in the cabin.

Inspectors found the 10 centimetre centipede between a seat and the cabin after the plane arrived in Auckland. It was then destroyed by biosecurity staff.

The ministry said it was most likely a passenger accidentally carried the centipede onto the plane in their hand luggage, which highlighted how important it was for people to check their bags.