The laying of a manslaughter charge over the death of a forestry worker is a game-changer in terms of the police investigating workplace deaths, the Council of Trade Unions (CTU) says. 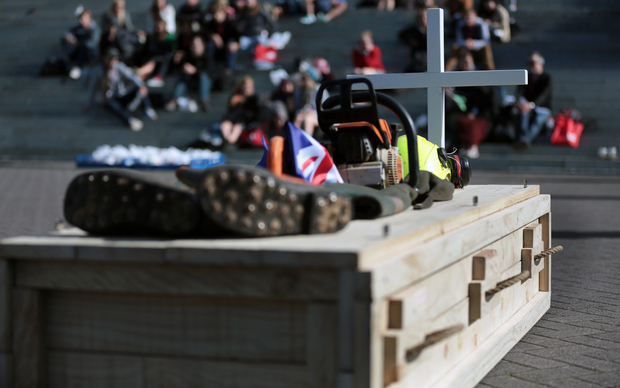 Relatives of forestry workers killed at work marched to Parliament and placed a coffin in the grounds in April. Photo: RNZ / Diego Opatowski

Philip Burr from Horowhenua appeared in the Levin District Court today after being charged over the death of Lincoln Kidd, who was crushed by a tree while working in a forestry block near Levin in December last year.

The 46-year-old applied for name suppression, but it was refused. He has been remanded on bail to appear at the Palmerston North High Court on 23 September.

Mr Burr already faces charges of health and safety breaches laid by Worksafe New Zealand in June, in relation to the accident.

At the time, the workplace safety regulator also charged another person, and a company, over the death.

The CTU has spearheaded a campaign for improved safety in the forestry industry and president Helen Kelly said it was the first time a death had led to criminal charges.

The case showed a shift in the police investigating deaths in the workplace, she said.

"It's been just the accepted practice, that workplace deaths will only be investigated under the Health and Safety in Employment Act.

"It's an area where people have been calling for manslaughter charges in workplace deaths and now we're seeing the police beginning to have a look at that."

Mr Kidd's family said they were relieved someone had been charged with manslaughter.

They said the forestry industry needed to be reformed in order to make it safer, and the development sent a strong message to forestry employers.

Last year 10 forestry workers were killed on the job, triggering an angry response from trade unions and an independent review of the sector's safety record.