Thames-Coromandel District Council is asking residents just how much they want to save the landmark Kopu Bridge, south of Thames, despite the mayor's view it should come down. 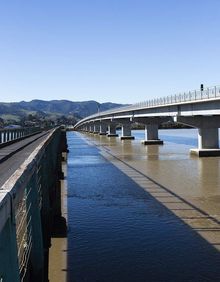 The 85-year-old bridge has not been used since a new one was opened in 2011, and is set to be demolished.

The Historic Kopu Bridge Society has asked the council to back its bid to keep the bridge for recreational use.

The Transport Agency says it will consider giving money to the society if all future costs are picked up by the council.

However mayor Glenn Leach said ratepayers should not have to pay if the project fails and his personal view is that the bridge should come down.

The views collected by the council will be given to elected members to help them form an opinion.