The Government's $100 million project to regenerate Christchurch's Avon River is being scaled back because of fears it might exacerbate the city's flooding problems.

The news came Wednesday night during an update by four of the region's councils on work to repair earthquake damage to the city's ecosystems - including the river. 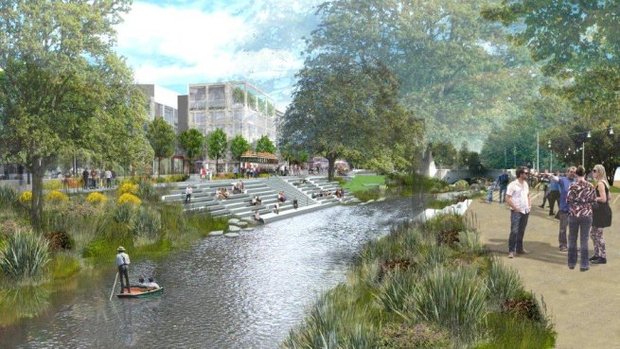 The beautification of a 3 km stretch of the Avon River involves cleaning it so it can once again support native fish and can safely be used for swimming.

Project manager with Christchurch central development unit, Tanya Neville, said the regeneration entails planting more trees on the banks of the river and placing rocks and logs in it to help create new ecosystems.

However Ms Neville said these measures also lead to increased flooding and so have had to be scaled back.

"To do more in the river, provide more plants and habitat areas, there would need to be a mitigation outside of the river corridor," she said.

She said one solution would be to pipe water during periods when the river overflows into neighbouring areas, but that this is almost impossible in an urban setting.

Ms Neville said the regeneration plans were reassessed earlier this year in the light of the once in a 100 year flood that was made worse by earthquake damaged land.

Further down stream, plans are progressing on the city's first bird sanctuary, which will have a predator proof fence.

Ecologist Colin Meark said the earthquakes had submerged the preferred location for the sanctuary - the Travis Wetlands - beneath an extra layer of water making it necessary to extend the sanctuary into a higher and dryer adjacent site, with the help of a wildlife bridge.

The bridge would span the busy road that currently separates the two sites and enable birds and lizards to move between the two areas.

Mr Meark said the total cost, which is still being worked on, is likely to be less than $10 million.

Christchurch City Council park ranger and ornithologist Andrew Crossland said while the earthquakes have destroyed some of the habitat enjoyed by the city's birds, they have also led to the creation of new wetlands such as a 20 hectare area at the mouth of the Styx River, near Brooklands.

Mr Crossland said the aim now should be to work with what nature has provided the city and look after these new wetlands.