A judge has ruled police must not give the FBI encryption codes to hard drives they seized from internet businessman Kim Dotcom. 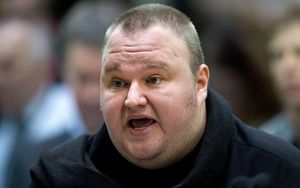 Mr Dotcom and police in New Zealand are still wrangling over a court order that says police must give him any irrelevant material that is on the hard drives in exchange for passwords to encrypted files.

The hard drives were seized in the raid on Mr Dotcom's Coatesville mansion, near Auckland, in January 2012 and copies were unlawfully given to the FBI.

Police have agreed to give Mr Dotcom access to a hint file that will let him work out what the passwords are.

They also wanted to be able to give the passwords to American authorities who are trying to extradite Mr Dotcom on copyright and money-laundering charges.

Justice Winkelmann ruled on Wednesday that police must not do that, as the FBI should not have been given copies of the hard drives in the first place.