Lou Vincent says match-fixing charges laid by the England and Wales Cricket Board "dispel any notions" of a plea bargain.

The former New Zealand test cricket player has been charged along with another former Sussex county player, Naved Arif. 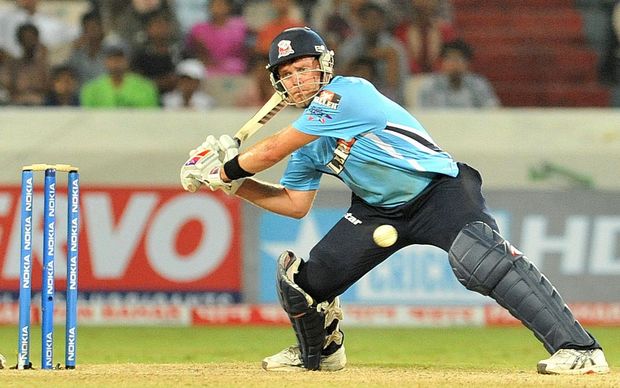 Lou Vincent in action for the Auckland Aces against Somerset in India in 2011. Photo: AFP

Vincent faces 14 charges relating to two matches he played for English county Sussex in August 2011 - a Twenty20 game against Lancashire and a 40-over clash with Kent. Arif has been charged with six offences relating to the Kent match.

If the pair are found guilty it will be the first time the game's authorities have proved the outcome of a county game in England was fixed.

Vincent, who played 23 tests and more than 100 one-day internationals for New Zealand, has given evidence to the International Cricket Council in its investigation into match-fixing.

In a statement on Friday morning, Vincent confirmed the charges had arisen from information he had disclosed to the authorities. The statement said he remained accountable for his actions of the past.

"The fact of the charges, and more are likely, dispel any notions of a plea bargain having been done as unfortunately appears to be wrongly suggested by others," the statement made through lawyer Chris Morris said. 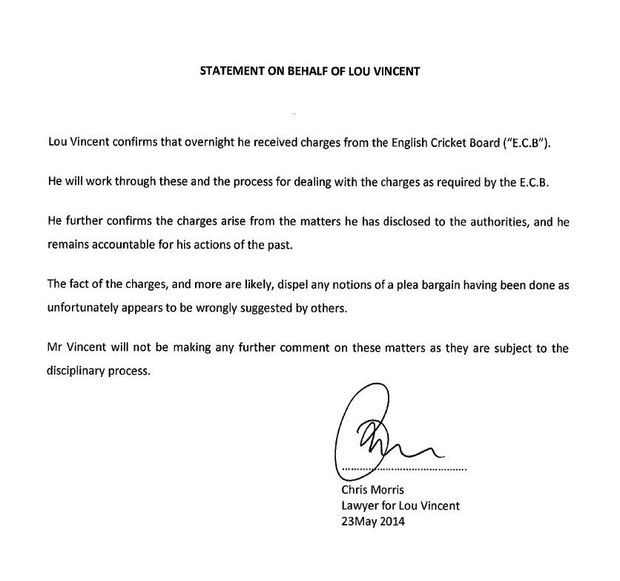 Vincent and Arif have been provisionally suspended from all cricket activities organised by the sport's governing bodies and they could be banned for life if they are found guilty of match-fixing, Reuters reports.

"This has been an extremely complex and lengthy investigation co-ordinated across many jurisdictions around the world," Chris Watts, head of ECB's Anti-Corruption unit, said in a statement.

"This matter is now the subject of formal legal proceedings and we will therefore make no further comment other than to re-iterate our determination to bring to account the very small minority who seek to corrupt cricket."

Daily Telegraph cricket writer Nick Hoult, who broke the story of charges against Vincent said penalties for match-fixing range from a five-year ban to a lifetime ban.

He told Radio New Zealand's Morning Report programme that since Vincent has retired as a player, any ban imposed would preclude him from coaching or having any involvement with cricket.

Black Caps captain Brendon McCullum has given testimony to the ICC's investigation into match rigging, detailing an approach from a player he described as one of his heroes to fix a game in 2008.

His evidence, along with Vincent's, was leaked to British media last week. It was reported that Vincent provided the ICC's anti-corruption unit with details of spot-fixing in the sport between 2008 and 2012.

The chair of the International Cricket Council's anti-corruption and security unit told Radio New Zealand's Nine to Noon programme McCullum's testimony was not leaked by anyone in his department.

Sir Ronnie Flanagan said it was important to find out who did leak the statements.

"We are actively investigating those leaks at the moment in the hope of identifying where they emanated and dealing with it in the future so that players, officials and witness can continue to have confidence in coming forward."

On Thursday, McCullum spoke publicly for the first time in Christchurch since the testimonies were leaked. McCullum said he has received support from around the world and the next few weeks could be tough, but his role in the investigation would continue.

Tim Castle, a former New Zealand representative to the International Cricket Council's anti-corruption unit, told Morning Report the leaking of information to the media such as the players' testimonies could affect the outcome of the inquiry.

"Traditionally, evidence which is in the public domain before an investigation has been concluded can prejudice not only the completion of the investigation but the fairness of it and the outcome of it," he said.