Thirty-eight New Zealand veterans of the Battles of Monte Cassino in Italy have helped commemorate the 70th anniversary of the World War II campaign.

They joined Governor General Sir Jerry Mateparae and Prince Harry on Sunday at a service at the Commonwealth War Graves Cemetery in Cassino.

During 1944, the Allies and Germany were locked in four fierce battles in and around the abbey and the town.

New Zealand forces, including the Maori Battalion were heavily involved in two of the battles in February and March of 1944. 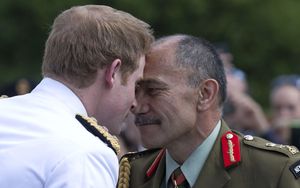 The battles to take Cassino were some of the most brutal and costly involving New Zealand forces in World War II with the loss of nearly 350 men and over 600 wounded.

The Allies needed to break through at Cassino on their way to Rome, but the strategic nature of the place with its hills and imposing abbey high above the town made this extremely difficult.

One feature of the fight for Cassino was the allied aerial bombardment that laid waste to the historic monastery.

Veteran Bob O'Brien interviewed in 2004 said the abbey above the town was a German stronghold and it had to go.

"It was hard to convince men that there weren't troops up there and observing you, it was menacing but you just lived with it".

Les Poole was involved in taking supplies up to the front line.

"At one stage we were offered a ride back on a tank but as noise travels, the enemy heard and put down a barrage on the tanks. We jumped off and hid in a hallow until the shelling had finished".

Ian Johnston was a Captain in the New Zealand Artillery.

He said while they had to deal with the enemy, they also were at risk from American bombers.

"When the Americans bombed everyone ducked, it was a popular joke. They dropped bombs willy-nilly".

Glyn Harper is Professor of War Studies at Massey University.

He said Cassino was a theatre of war, like El Alamein, that caught the attention of New Zealanders.

"It was a tough bloody struggle and we also didn't take all of our objectives, so it was a failure, so quite reminiscent of some of the battles of the First World War, indeed the fighting in Southern Italy and around Cassino was some of the toughest of the war and New Zealand was involved in it".

Professor Harper said the Allies underestimated the terrain and climate at Cassino.

"The three attacks, prior to the last one, were carbon copies of the previous ones which was attacking a very heavily defended position at its strongest point which tended to result in failure and massive casualties.

While at Cassino for the 70th anniversary over the weekend, the New Zealand veterans healthy enough to make the trip were given a guided tour of the battlefield.