Prime Minister John Key says there will not be a referendum on whether to change the flag with this year's election, but there will be one if the National Party is returned to power. 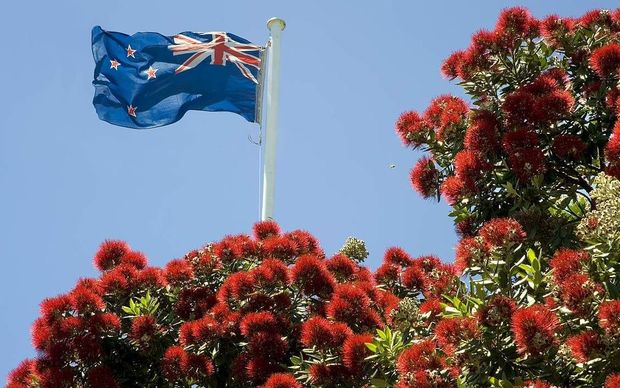 Political parties agree that holding a referendum on the flag after this year's election is reasonable. Photo: PHOTO NZ

Mr Key has outlined a plan to hold a public discussion and vote in the next parliamentary term on New Zealand's flag. He says the design of the current flag symbolises a colonial and post-colonial era whose time has passed, but he says New Zealand retains a strong and important constitutional link with the monarchy that he does not see a groundswell of support to change.

Mr Key says if he is Prime Minister after the general election on 20 September, he will write to the leaders of all political parties represented in Parliament asking them to nominate an MP to join a cross-party group to oversee the flag consideration process.

The group would recommend the best referenda process to follow, and also be involved in nominating New Zealanders from outside Parliament to form a steering group which would be primarily responsible for ensuring the public has the opportunity to engage in the debate.

Mr Key says he would like to see the referenda process completed during the next Parliamentary term, so it does not intrude on the 2017 elections.

He says the debate should wait until after this year's election to ensure there's plenty of time for the public to engage and it doesn't distract from more important matters.

Mr Key said he wants a flag that is unique, confident and enduring that screams New Zealand.

The Labour Party has been quick to echo the Prime Minister's promise to hold a referendum over the flag, if elected. However, leader David Cunliffe accused Mr Key of raising the matter now as a diversionary tactic.

"The whole flag debate was first raised as a diversion from a growing public debate about inequality. Then the Electoral Commission came back and said it would be a major logistical exercise to do it by the time of the election. Now, the Government's pushed it out - there are bigger issues to fry for this election."

Green Party co-leader Russel Norman said John Key's plan to hold a referendum on the flag after the 2014 election is very reasonable.

"He seemed to have changed course somewhere along the track. When he started it sounded like he was launching a big thing about the flag and he already had an idea of what the alternative would be. And now I think he's actually retreated and adopted a much more sensible position."

Dr Norman said it is appropriate that the flag is not the focus of the election.