Internal Affairs Minister Chris Tremain wants to know why a Northland man was able to contest the Far North mayoralty after being convicted of serious sex and violence crimes against his family.

Prominent farmer and anti-Treaty activist Allan Titford was on Wednesday jailed for 24 years on a raft of charges including rape and arson.

Titford was convicted almost two months ago of 39 offences but ran for office in October's local body elections while in jail awaiting sentencing. 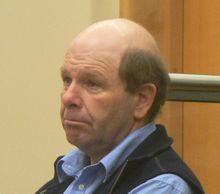 His concern is that the 414 people who voted for Titford in mayoral elections held on 12 October were supporting a man whose candidacy could have been illegal.

However Mr Tremain told Radio New Zealand's Morning Report programme on Thursday there is no way Titford could ever have become a mayor or councillor.

"The Local Government Act is very clear that if someone is convicted of an offence punishable by a prison term of two years or more they are immediately ousted from office.

In sentencing Titford at the Whangarei District Court, Judge Duncan Harvey said the 53-year-old had subjected his wife and family to violent abuse in a "reign of terror" that dated back to 1989.

Titford's name had been suppressed to protect the identity of his now ex-wife Susan Cochrane, who was one of his victims. Ms Cochrane voluntarily waived her own name suppression and Titford's name was made public on Wednesday.

Titford is well-known for his 20-year campaign against the Waitangi Tribunal and the Treaty of Waitangi after the Roroa land claim led to the sale of his farm to the Crown in the 1990s.

"I think that those of us who know how destructive he was in the early years take no satisfaction from this but there's an old saying 'what goes around comes around'."