The man hoping to be elected Auckland's first Pasifika mayor says he would push for the city's leadership to more closely resemble its ethnic communities.

Reverend Uesfili Unasa launched his campaign on Sunday also promising a focus on improving lives in the poor southern areas. 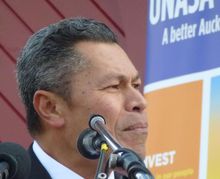 Mr Unasa, who was born in Samoa, told more than 100 supporters at the launch that Auckland's 150 ethnic communities need a stronger voice.

He says in the multi-million dollar mayoral office, in the council itself and at the top of the major council agencies, the faces still reflect what he calls "the old Auckland".

Mr Unasa says he would appoint ethnic advisors to the mayor's office and urge more diverse recruitment at senior levels in the council.

He says sitting mayor Len Brown has forgotten the poor ethnic communities in the city's south.

Mr Unasa, who previously chaired the council's Pacific People's Advisory Panel, says his top focus would be the council's Southern Initiative, which aims to improve lives in poorer southern suburbs.