Hawke's Bay Maori have hailed the unveiling of pou, or carved posts, in Hastings as an historic moment for the region.

Hundreds of Maori took part in a dawn ceremony on Friday for the unveiling of 18 pou in the city's Civic Square. Together they form a cluster signifying Matariki (Maori New Year). 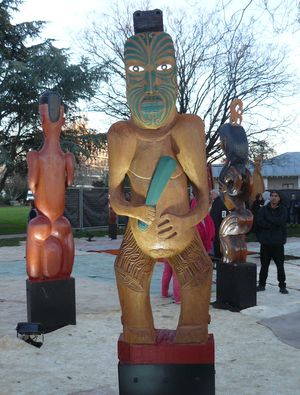 The pou have been placed so each faces the direction of the marae it represents. Photo: RNZ

The poles are carved from 1000-year-old totara trees gifted by Tuhoe after digging them out of a riverbed.

At the unveiling on Friday, each tribe blessed its pou with a prayer and explained the iwi's genealogy and the story behind the carved posts.

The two-metre-high poles represent all marae in the district. Each pou represents a tipuna (ancestor) and was sculpted by carvers chosen by the marae.

Ngati Kahungunu kaumatua Jerry Hapuku says it is wonderful to see all the pou that have been carved in the likeness of ancestors.

The project is a partnership between local Maori and Hastings District Council as part of a multi-million dollar redevelopment of the square.

Project facilitator Tama Huata says the city feature is an opportunity for the hapu to share their history and stories with the community.

Hastings mayor Lawrence Yule says 26% of Hastings' population is Maori and he's delighted this is now reflected by the group of pou.

One of the carvers, Takirirangi Smith, says it's quite an achievement for 14 or so hapu and Hastings District Council to collaborate on the project.

Pou a gateway to the past - McGarvey

A Tuhoe kaumatua, Hakeke McGarvey, who found the trees preserved in a river, says their age connects Maori ancestors with the people who visit the pou today.

Mr McGarvey says it is important for visitors to Hastings to see the pou and learn the stories of the totara.

He says the unveiling is a glorious occasion for both Maori and non-Maori.