Mana Party leader Hone Harawira plans to call about a dozen protesters to give evidence in his defence as he fights a charge stemming from a protest in Auckland.

The MP was arrested in October 2012 during a protest against the removal of state houses in the suburb of Glen Innes. 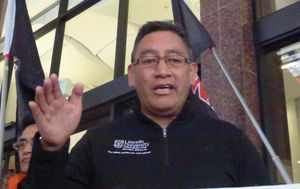 Mr Harawira is defending the charge against him for not moving his car which was blocking the removal of a state house.

The MP is representing himself and has his wife acting as a Mackenzie friend - a person who sits with him and gives him advice in the courtroom.

At the hearing in the Auckland District Court on Tuesday, Hone Harawira asked the judge to throw out the charge, but the judge dismissed it.

Crown witness Inspector Peter Gibson told the court Mr Harawira ignored a police instruction to move his car, so officers had no choice but to force entry into it and arrest him.

Mr Harawira said he intends to call protesters who were there on the night to give evidence including John Minto, the Mana Party president and Auckland mayoralty candidate.

Protesters who were at demonstration were outside court on Tuesday and the courtroom was full of Mr Harawira's supporters.