Olympic gold medal winner Valerie Adams was met by a cheering crowd of family and well-wishers as she arrived back in New Zealand on Wednesday.

The shot put champion was greeted by a haka, flags, banners and music, and was mobbed after touching down at Auckland airport.

An expectant crowd had gathered to see Adams for the first time since she was belatedly awarded the gold after Nadzeya Ostapchuk, of Belarus, failed a drugs test and was disqualified after the London Games. 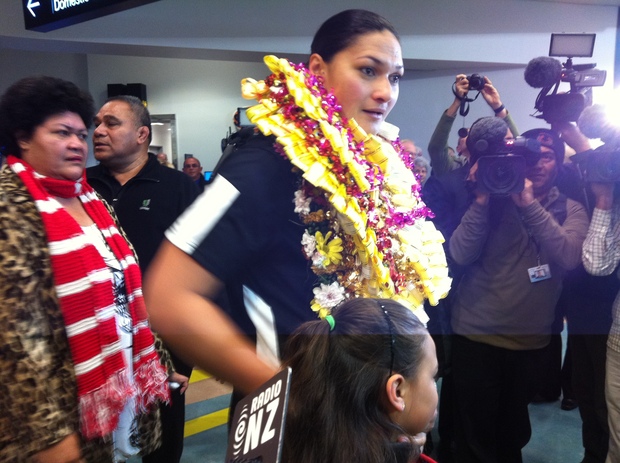 Valerie Adams was greeted by family and media at the airport. Photo: RNZ

Adams has been competing in Europe since the Olympics and said she was delighted to be back home after a long flight from London.

"I'm so excited. I have seen the medal - it's very beautiful and it's an amazing thing to look at and to touch, but I can't wait for it to be around my neck and have it home with me where it belongs."

The crowd erupted into cheers as Adams peeped around the doors and then leapt into the arrivals hall. She told Radio New Zealand News she was overwhelmed at the sight.

"It's amazing, seriously - my sister's here from Rotorua. It's just totally overwhelming. I didn't realise this many people were going to turn up. This is just awesome."