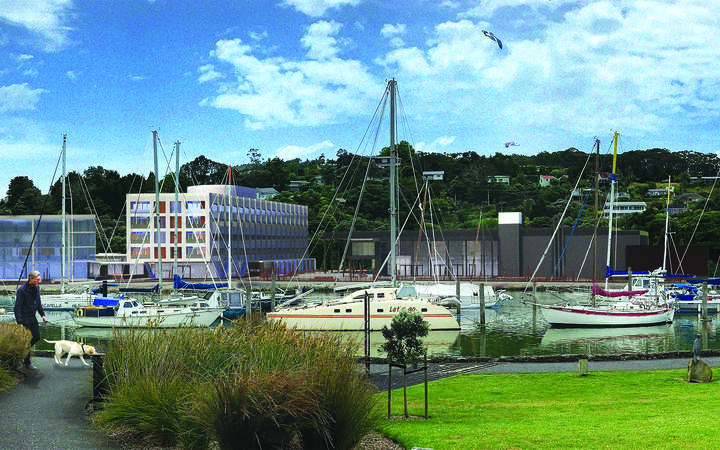 The campaigns seek to woo people putting submissions in to Whangārei District Council (WDC), ahead of the council's 26 November formal decision on whether to proceed with the centre.

Whangārei District Council (WDC) is set to spend $57 million of rates on a $123 million conference and events centre. Northland Regional Council (NRC) is putting up $6 million and the Government has earmarked $60 million for the Town Basin development. WDC would also sign ratepayers up to underwrite project cost overruns and towards annual operating costs.

Thousands of dollars are being spent on major print and radio advertising campaigns for the duration of the month-long public submission period. This began on 18 October and ends on 18 November. More than 1000 submissions have already been received by WDC.

The council wants public feedback via its website and at three public meetings. It will then decide on 26 November whether to go ahead with the centre, just four days out from the Government funding uptake deadline. There will be no option for submitters to address councillors deciding on this matter ahead of 36 November.

Submissions will be posted on WDC's website once consultation was complete.

The conference and events centre would be part of a bigger $250 million Oruku Landing hotel, apartment and shopping development by Northland Development Corporation (NDC).

NDC and supporters have launched their advertising campaign in favour of the development, aiming to inform the public of the plan's benefits.

Meanwhile opponent Forum North Trust is running its advertising campaign against the development. The trust has its own plan to develop Forum North as a lyric theatre and conference centre.

NDC director Ben Tomason said their advertising was about creating awareness and getting people to have a say of the proposed development.

Tomason said most people don't understand the scale of the opportunity form the development.

"We think it's a huge opportunity. It would be a tragedy if it's missed because ratepayers didn't get their voices heard because people are making decisions based on scaremongering," Tomason said.

The Government's $60 million would go to be spent on infrastructure in Auckland, if the WDC vote went against the centre development.

Forum North Trust (FNT) spokesperson Cherry Hermon said her group had launched the advertising campaign to make sure people understood what was going on.

The trust was behind a WDC proposal to build a new 850-seat new theatre in Forum North, suitable for orchestral and other arts performances.

The Oruku Landing development, with its 1000-person conference centre, has seen that change.

"A second element to this project is a purpose-built conference/expo centre taking advantage of the proximity to car parking and public transport with outstanding views of Cafler Park and surrounds. These projects would be undertaken in a partnership between Council and other providers. Major construction works are anticipated to begin in 2021," the Whangārei 20/20 document said.

Hermon said that funding was no longer in WDC's new 2021-2031 LTP. Whangārei stood to potentially permanently lose out on the provision of a good quality, satisfactorily-sized theatre if Oruku proceeded.

Public submissions can be made here.

The first of just three WDC public meetings about the proposal is at Ruakākā recreation centre on Monday, 8 November, from 7pm- 9pm.

A third meeting will be at Hikurangi war memorial hall on 11 November from 6.30pm-8.30pm.

Attendance registration is required for these meetings for Covid-19 risk management and places are filling fast. All meetings will be subject to Covid alert levels.