It's a hot, sunny day, but when the wind changes Marijke Warmenhoven is on edge. 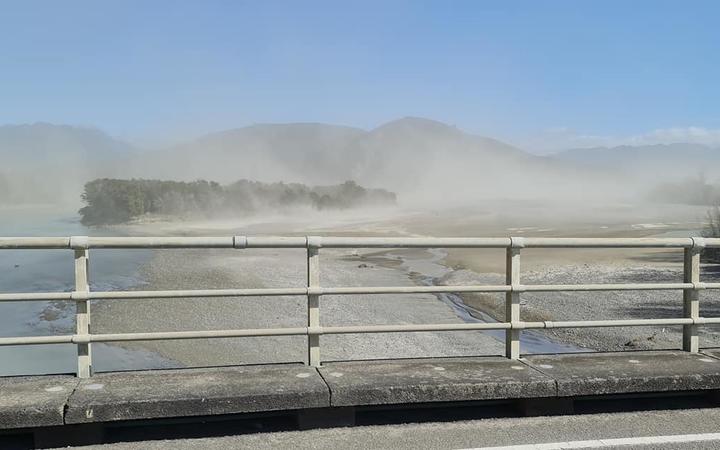 She rushes to pull her washing off the line, closes the windows and wishes she could be anywhere but Ruatoria.

A wicked norwesterly lifts dust from the Waiapu riverbed, swirling it above the river in a white haze.

It drifts across homes at the edge of Ruatoria, leaving a light covering on decks, rooftops and even creeping through the crevices of tightly-shut windows.

Outside, the air turns thick and it can be hard to breathe. If the dust storm hits while Warmenhoven is on the road, she can't see more than a few metres in front of her.

"I just say to the kids, I want to leave," Warmenhoven said. "But it's home."

The Waiapu awa is weaved through the pepeha of many Ngāti Porou - "Ko Waiapu te awa", Warmenhoven said.

It is also one of the most sediment-laden rivers in the world.

Sediment washes down from the valleys and is deposited in the riverbed. When the floodplains dry out, and the wind picks up, the dust becomes airborne.

Residents say they deal with about half a dozen "dust days" each year. Most are during the drier months.

It has been happening for years, but Warmenhoven - a director of Te Runanganui o Ngāti Porou, and an environmentalist - believes the erratic weather events associated with climate change are making dust days more common. 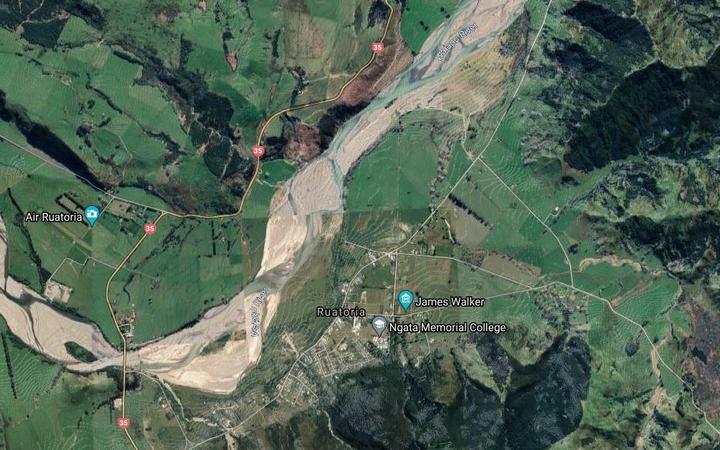 "We all know that climate change is having an effect on weather patterns. With that you're getting the winds that disturb the river bed," she said.

The imbalances experienced today are on the back of past actions, she said, referring in part to the burning of the Tapuwaeroa Valley by colonial families in the 1800s.

The Waiapu River has the highest suspended sediment yield of any river in New Zealand, according to a 2011 study. Each year 35 million tonnes of soil flow out from the river to the sea.

It is attributed to the region's natural geology and the impact of decades of unsustainable land-use practices.

Manu Caddie, who lives about 10km from Ruatoria, said he doesn't cop the dust at home, but has seen it and has caught wind of the problems it poses for some. 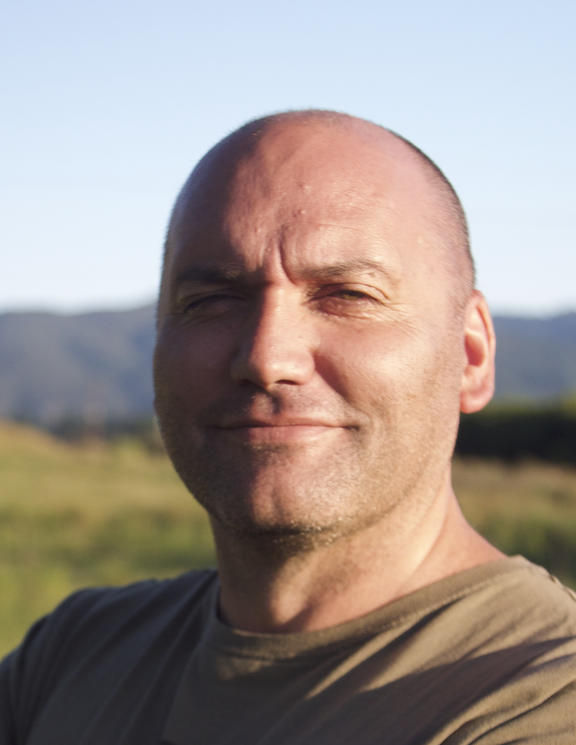 Manu Caddie says early warning systems are used for dust storms in other parts of the world. Photo: LDR / Supplied

"It's an annual problem that's getting worse," he said.

That's what long-time residents are saying anyway, Caddie said, but it has not been thoroughly monitored so they do not know for sure.

"The valleys at the river mouth probably cop it the worst, but Ruatoria township also cops a lot of dust days," Caddie said.

"Usually it's only a day or two, but some people really struggle with the dust.

"It's just another outcome of the ongoing problem of erosion creating issues for communities in the valley."

Caddie, a strong community advocate, made contact with Gisborne District Council and some experts at the University of Auckland late last year in the hope that they could quantify the significance of the problem and work out some potential solutions.

The council set up an air quality sensor at Warmenhoven's house in January.

When they looked at the data from a 24-hour period, the air quality looked very good, an expert at the council told Caddie.

So what they needed to do was hone in on smaller time intervals.

Looking at 10-minute averages between 19 January and 25 May, there were four hours where the air reached a threshold that was considered polluted.

At those times, PM10, which is inhaleable particulate matter sized 10 micrometres and smaller, was greater than 50 micrograms per cubic metre of air.

Two peaks that showed up in their monitoring coincided with norwesterly gusts that may have caused a 20-minute dust storm, the council expert said.

Caddie said they aren't going to send water trucks up and down the river bed, so they need to look at other options.

Through his research, Caddie has found early warning systems have been set up in other parts of the world facing similar problems with dust storms.

If it's been dry and the wind picks up, an alert goes out to residents. Caddie suggests this could work in Ruatoria.

A cloud of dust billows up around an old gravel processing factory next to the Waiapu River in Ruatoria. Photo: Gerry Heeney / Supplied / LDR

Wayne Palmer, a senior teacher at Ngata Memorial College, said the dust is only really an issue if it hits when the students are outside at interval or lunch time.

"We're not totally in the line of the dust, but you do get some dust coming toward the school," he said.

Most of their windows at school are closed during these warmer days because of air conditioning.

Spring time is when he notices the dust days.

"You can actually see the dust rolling down the valley from Hikurangi coming into town.

"You get that warm wind and you can see the dust storm coming off the river all the way down."

Asked how the community feels about it, Palmer considers for a moment.

"I guess it's just one of those things you sort of learn to put up with." 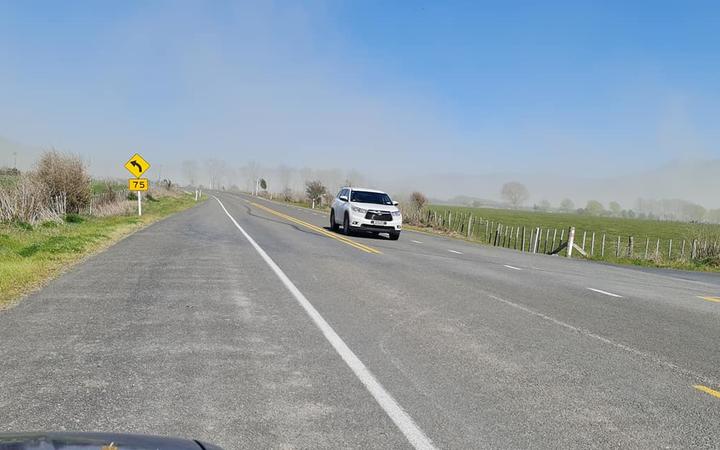 University of Auckland air quality expert Professor Jennifer Salmond said the health effects of the dust will depend on the size of the particles and what it's made out of.

Particles bigger than PM10 are unlikely to have health impacts, but smaller than that could be a hazard, she said.

"It is quite unusual for natural particles from erosion processes to be in the very tiny size fractions. I would expect the particles to be in the coarser fractions ... but it would be good to go out and measure that.

"If you can see the dust, it's generally quite big, and that would be reassuring that it's in the bigger fraction.

"It might just be little bits of rock, or it might be other types of contaminants perhaps from fertilisers and pesticides.

Professor Salmond believes a more detailed study of the dust would be beneficial.

Dr Jon Tunnicliffe, also at the University of Auckland, is an expert in the geomorphology of rivers. He said the Waiapu River has been of great interest internationally.

Clearing of vegetation off the hillslopes, paired with a legacy of "readily mobilised" sediment is how you end up with the largest sediment yields in the world, he said.

"It's a particularly fragile morphology. The bedrock is basically old seafloor that has been lifted up geologically quite rapidly."

The rock hasn't fully lithified and is what Dr Tunnicliffe describes as "half baked" - making it extra susceptible to erosion.

"If you take the vegetation off, and then have something like Cyclone Bola coming through, adding that additional disturbance on the geology, it's quite prolific in terms of erosion."

Council environmental services and protection director Helen Montgomery said early findings show the dust events are short-lived which means they do not breach the air quality standards for the protection of human health.

But they can aggravate existing health conditions in vulnerable people such as pakeke (elders), asthmatics and those with respiratory conditions, she said.

The most common symptoms include irritation to the eyes, ears, nose, throat and upper airways that can cause coughing, sneezing, hay fever or an asthma attack.

He has offered up some precautions that can be taken to minimise potential health risks.

Try to find somewhere indoors to shelter if you are caught up in a wind-blown dust event, avoid outdoor activity during a dust storm, but if you can't, wear a mask. If you think the dust has come inside, vacuum regularly.

Warmenhoven said the dust is a reflection of the river's health. The solution?

"Restore the awa back to its original glory," she said.

If symptoms persist following exposure to a dust storm, contact Healthline any time for general health advice on 0800 611 116, or call your GP.