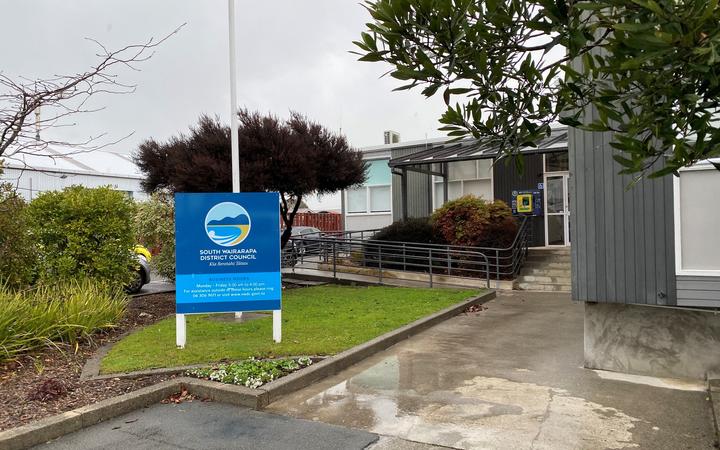 South Wairarapa District Council is under scrutiny over its Code of Conduct. Photo: Sue Teodoro

Of New Zealand's 78 councils, it is the only one with this caveat.

A similar rule operates in Northland Regional Council's Code, which states that if a council decision has been made, "comments [by elected members] should reflect the collective position of the council".

All other Codes for New Zealand councils permit elected members to criticise council decisions and policy, as long as it is made clear their comments are a personal view and do not reflect the majority.

The caveat in SWDC's Code has been labelled as a "restriction on democracy" by local government experts.

Andy Asquith, Adjunct Research Fellow at the John Curtin Institute of Public Policy, said as long as they were not breaking the law, elected representatives should be able to voice their opinion without restrictions.

The caveat in SWDC's Code of Conduct "seems to be a restriction on democracy", he said.

Massey University journalism academic Catherine Strong did a survey of New Zealand councils in 2014 and found that more than 20 per cent of councils had a "muzzle-type policy" embedded in their Code of Conduct at the time.

"There was a lot of publicity about how this was undemocratic, and most have since tidied up their code," Strong said.

Regarding SWDC's code, Strong said it was "inappropriate and undemocratic for a council to prevent elected members from criticising any council activity in the media or other public platform".

"The elected members represent the ratepayers and are not spin doctors for the council.

"It is peculiar that SWDC continues with this unfitting code."

South Wairarapa Mayor Alex Beijen said the extant Code of Conduct was discussed last year by councillors, and a full review would continue as time and capability allowed.

Local Government New Zealand [LGNZ] was approached for comment but said it did not make comment on issues affecting individual councils.

"With regard to codes of conduct and their content, we provide all councils with a template that they can use should they wish and adapt as they see fit," LGNZ said.

Strong said the LGNZ template for councils' Code of Conduct "quite clearly outlines the freedom elected members should have to publicly criticise council issue or policy".

"This public criticism puts the spotlight on something that seems wrong should be further discussed or considered.

"Restricting their comments to only issues being considered at a formal council meeting simply is further impeding the effectiveness of ratepayer-elected councillors.

LGNZ's Code of Conduct template states: "Members are free to express a personal view to the media or social media at any time, provided the following rules are observed: comments shall be consistent with the Code; comments must not purposefully misrepresent the views of the Council or the views of other members."

Local Democracy Reporting contacted each of the 22 elected representatives in South Wairarapa for their thoughts on the code, and whether they believed it needed to be changed.

In a joint response from the Martinborough Community Board, members said they had struggled with the Code and had received warnings.

"As a newly-elected Board in 2019, we followed council advice and adopted the South Wairarapa District Council's Code of Conduct [from 2016]," they said.

"As a board who have since had numerous contentious issues within our urban and rural ward, we have struggled with the existing Code of Conduct, having received warnings about our board's conduct from the Mayor and CEO when we have respectfully raised the questions which our community have wanted answers to."

They said their role was to advocate and ensure that their community voice was heard at the council table, "and we always attempt to do this in a way that respects the station of mayor, councillors, community boards, and all elected members".

"We believe that the current Code of Conduct prevents elected members from questioning council."

The community board members said they wanted the Code to be updated to be in line with the majority of New Zealand's councils.

Greytown Community Board members Shelley Symes, Simone Baker, Graeme Gray, and Ann Rainford said they needed to be able to speak openly to the council about issues impacting the community.

"Board members have the right to voice their considered opinions, around the table or elsewhere," they said.

"In our view, it is the manner in which the opinion is put forward, on the basis of collegial respect, that is important.

"The message, not the messenger, should be highlighted.

"Where an opinion differs from a majority view, or where it may go against established policy or decisions, it needs to be declared as such.

"However, there should not be any restriction to an opinion being voiced.

"If there are no individual views, and there is no room for critical thinking, local democracy runs the risk of being gradually eroded."

Featherston Community Board chairperson Mark Shepherd said the Code should be updated to be in line with other councils' Code.

"As we are elected to be the voice of our communities, it is important that we are able to have that voice heard which, at times, means speaking out against what the council may say or decide on.

"Positive criticism is actually heathy if taken on board in the manner it was intended.

"At the end of the day, we are in our positions for our communities, and I think it is important that those within our communities know what our individual views are.

"My overall thoughts are that transparency, open, and honest communication are essential.

"Having a Code of Conduct that does not allow for healthy debate or dissension only serves to sanitise issues that would benefit from having wider debate or exposure.

"I also wonder whether the current code of conduct has any teeth given recent examples of councillors openly criticising the council in the media.

"There is no point in having such a Code of Conduct if it is continually ignored."

Featherston Community Board member Claire Bleakley also believed the code should be updated.

"Any dissent or criticism of an issue does not mean it relitigates or undermines the council, but should be seen by the council as a red flag that they have not communicated or listened to their communities, and the issue should be returned to be communicated and consulted on before re-entering the debating chamber."

She said debate should be issue-driven, not personality-focused.

Featherston Community Board members Jayson Tahinurua and Mike Gray were approached for comment.

Featherston ward councillor Ross Vickery said he saw a distinction between comment and criticism and did not feel SWDC's Code of Conduct inhibited democratic representation.

"As councillors, our ratepayers are best served by a team that works together constructively to produce what, in our judgment, are the best outcomes for the community in the long term.

"If I disagree with a collective decision, my vote against or abstaining will be recorded in public documents.

"I am happy to explain my reasons for doing so but will abide with the majority decision.

"If I am unhappy with the actions of officers in operational matters, I will bring this up at the appropriate committee."

Martinborough ward councillor Pip Maynard believed it was time to update the Code.

"When I am representing the people of our district, I am being their voice at the table and as governance we should always make sure that this important fact is not forgotten.

"The Code of Conduct should not be seen as a piece of work that enables "the tail to wag the dog".

"Therefore, councillors, as the elected voice of their communities, should not be in fear of having the Code of Conduct used to try to "muzzle" them."

She said robust discussion should be "embraced, not shunned".

Masterton and Carterton's Code of Conduct

Carterton Mayor Greg Lang said elected representatives in his district could engage with the media and the public when and how they liked, as long as they adhered to the Code of Conduct.

Carterton District Council's Code states: "Members are free to express a personal view to the media or social media at any time, provided the following rules are observed: comments shall be consistent with the Code; comments must not purposefully misrepresent the views of the Council or the views of other members".

"From my perspective, decision-making debate amongst members needs to be at the council table," Lang said.

"Our elected members are encouraged to engage with residents via social media, while in keeping with the Code.

"This is especially important now, during lockdown.

"Online forums and social media provide one of the few ways we can engage with the community as we maintain safe distancing."

Masterton Mayor Lyn Patterson said their Code of Conduct "does not preclude elected members from expressing their personal views through the media".

"However the Code is clear that this should be presented as their personal view, and not that of council."

She said good governance dictated that "debate between councillors should happen at the council table".