Nitrate levels in Waikato's groundwater are causing concerns among scientists asked to look at the levels in the region. 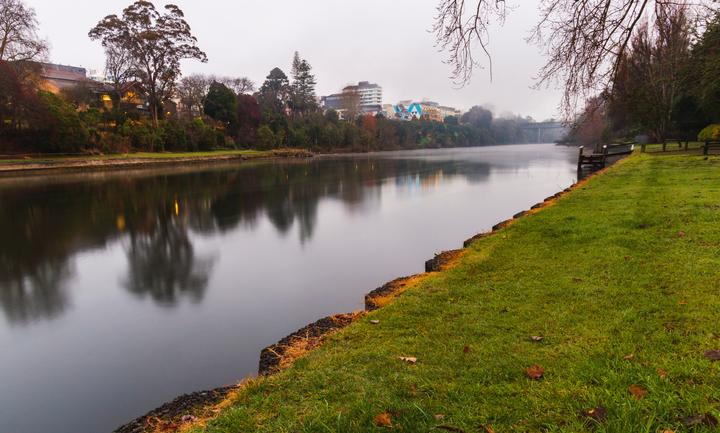 The Waikato study was undertaken after a Danish study found a significant increase in the risk of bowel cancer from drinking water nitrate levels with levels much lower than the current NZ Drinking Water Standard.

Some Waikato well water has higher nitrate levels than recommended by the Danish study, but the Waikato Regional council faces two issues.

A second issue is the Danish study itself. The Danes recommended a safe nitrate limit of 0.87mg/L, but Waikato Regional Council (WRC) scientists said the Danish study did not consider factors such as co-exposure to other water-borne contaminants associated with cancer risk. Nor did it assess the risk from the intake of nitrates in food in comparison to drinking water intake.

Total exposure to nitrate from food and water is estimated to be about 60 to 90 mg per person per day, of which at least 90% is from food.

"At present the accepted guideline value for nitrate in drinking water is 11.3 mg/L. As highlighted in our report to the Environmental Performance Committee in May, there is a growing body of evidence which suggests this guideline may need to be revised," Mike said.

"But it is our understanding WHO has not yet embarked on this review. In relation to human health associated with nitrates in drinking water, Waikato Regional Council would take guidance from the Ministry of Health, which in turn takes guidance from WHO."

Managing nitrate effects on freshwater ecosystems falls squarely on regional councils, as set out in the National Policy Statement for Freshwater Management (NPS-FM) 2020, he said.

The WRC has to determine the appropriate levels of nutrients (nitrates and phosphates) to deliver on community-agreed freshwater objectives.

The WRC proposed regional plan review will set nutrient targets for all waterways in the region.

The WRC's Environmental Performance Committee in May received a report on nitrate levels by its own scientists John Hadfield, Eloise Ryan and Jonathan Caldwell, that warned of rising nitrate levels in wells and rivers across the region.

But most (69 percent) monitored Waikato River sites had recorded a maximum concentration above the proposed Danish limit. When assessing a 10-year trend in nitrate, approximately 58 percent of river sites were 'likely or very likely degrading', indicating increasing levels of nitrates in many river sites.

About 12 percent of wells in the Waikato region were found to have nitrate concentrations exceeding the NZ drinking water standard MAV of 11.3 mg/L and a further 20 percent had concentrations above half the MAV, recent monitoring shows. Three quarters of the 110 wells had concentrations greater than 0.87 mg/L. 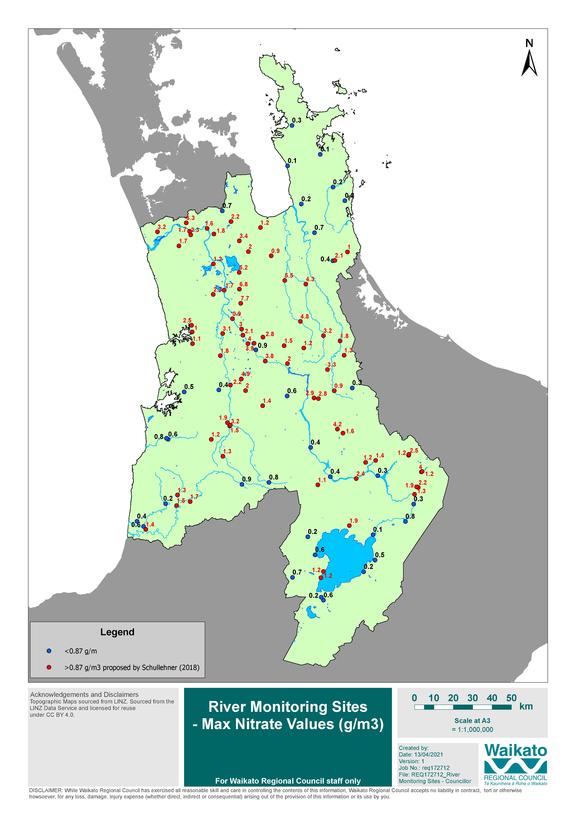 If the NZ drinking water standard for nitrate was lowered to a threshold similar to the 0.87mg/L proposed in the 2018 Danish study, there would need to be considerable reduction in nitrate concentrations and or introduction of expensive drinking water treatment systems, the scientists said.

A Ministry of Health task force is being set up to look into whether the same association between nitrate in drinking water and colorectal cancer exists in NZ and what the implications are for public health management and whether this would require a review of NZ's drinking water standard for nitrate.

The regional council is implementing policy changes to protect ecosystems through more strictly controlled diffuse sources of nitrogen, but follows directions from the Ministry of Health, which obtains advice from the WHO, in applying drinking water standards.

This week four New Zealand environmental organisations urged the government to defend native species and human health by setting a nitrate pollution limit of under 1mg per litre for waterways.

The 1mg/L nitrate limit would be the key in determining the maximum amount of agricultural nitrate pollution allowed in rivers.

A nitrate limit was left out of last year's freshwater standards, in-line with industry demands, but was now being reassessed by the Ministry for the Environment, the environmentalists said in a joint press release.

"Forest & Bird, Greenpeace, the Environmental Defence Society, and Choose Clean Water are united in backing the science, which is clear and robust. The absolute maximum nitrate pollution that should be allowed is less than one milligram per litre," Marnie Prickett of Choose Clean Water said.

The major causes of nitrate pollution were a huge increase in dairy cows and synthetic nitrogen fertiliser use since 1990, the group said.

"We all want to be able to look out over our local rivers and see them flourishing with life; full of native fish and insects, and surrounded by bush and birdsong," Forest & Bird freshwater advocate Annabeth Cohen said.

A nitrate concentration of less than 1.0 mg/L did not mean pristine, Environmental Defence Society chief executive Gary Taylor said. It was an environmental bottom line required to prevent the periphyton growth which killed off fish and invertebrates in freshwater systems.

"The Ministry for the Environment itself recommended last year that nitrates not be allowed to exceed 1mg, as did the majority of the Science and Technical Advisory Group advising on the Fresh Water Standards," Taylor said.

"The government will fail to meet its own Freshwater standards without a nitrogen pollution limit of under one," Marnie said.

The nitrate pollution limit of 1 mg/L is measured as dissolved inorganic nitrogen (DIN). This was the advice of the government's Science and Technical Advisory group in the development of the recent freshwater reforms, Greenpeace spokesperson Zoe Deans said.

Nitrate is highly water soluble, therefore it leaches through soils and into groundwater easily and is one of the most common water contaminants.

Major sources include excessive application of inorganic fertiliser, ruminant urine and dung and human waste. Excess nitrates in water are a cause excessive plant growth, which can effectively strip oxygen from the water, stressing aquatic life and fish, as well as reducing recreational values.

The New Zealand drinking water standard of 11.3mg/L was set to avoid one of the main health concerns regarding nitrate, the formation of methaemoglobinaemia (blue-baby syndrome). This happens when nitrate is reduced to nitrite in the stomach of infants, and nitrite is able to oxidise haemoglobin to methaemoglobin, which is then unable to transport oxygen around the body. This can cause cyanosis and asphyxia.

WRC's own Waikato Freshwater Strategy states the current state of regional fresh water could be seen as a result of ad hoc management in response to issue driven directions from central government and a preference for economic development that competed with an incomplete understanding of site specific environmental limits.

"We have pushed the economic boundaries to the extent that the region's natural environment has lost its capacity to support the chosen economic direction at all times (particularly during times of stress such as droughts and floods) and reduced environmental quality for social opportunities and cultural use."

The strategy went on to say the challenge for the WRC was it did not have a clear understanding of how close it was to, or how far it had exceeded, the carrying capacity of the region's fresh water now and into the future.