A delighted four-year-old boy in Methven has been reunited with a "heroic" fireman who helped him and his mother as heavy rains flooded the region. 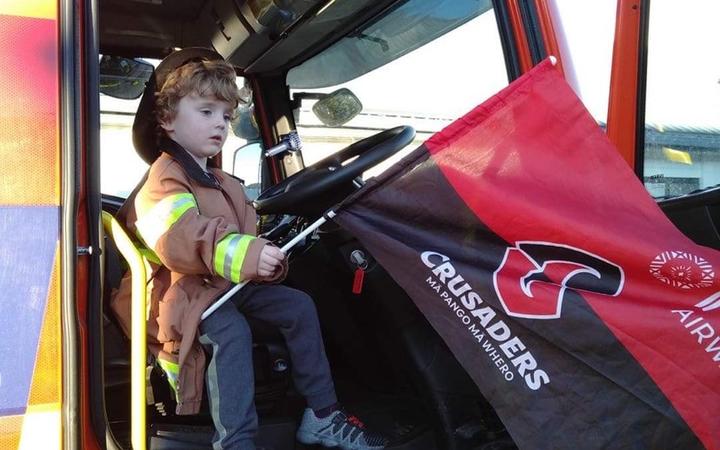 Nicole Quilter and her son Nixyn had to contend with water leaking through the ceiling on the Saturday as heavy rain converged on the district.

"It was getting really dangerous because it was coming in behind electricals," Quilter said.

With bursts of water coming through the ceiling, the distressed mother put a call out for help on a community page before putting a call into the Methven Fire Brigade.

A mystery man hopped on to the roof of the home and completed a makeshift repair.

"He then told us to isolate those switches and just made sure we were okay and then off he went."

With her son eager to track the man down, it was later revealed to be Methven fire volunteer and "local legend" Dave McLeod.

Nixyn and his mother were later invited down to the Methven Fire Station where the youngster gifted McLeod some chocolates and a Lotto ticket.

"We had a look around the fire station and Nixyn got to be a real fireman and dress up.

"Those guys have their own families so to come out and help us, it was pretty amazing."

Quilter said it also encapsulated the community spirit in Methven which remained one of its most defining characteristics.

"Everyone does tend to come together in a crisis but there's something very unique about Methven.

Although keeping the old rental property watertight in the interim was proving challenging, Quilter said McLeod's deeds were the difference between getting through the event in one piece and not.

She is now looking for a rental in the Mid Canterbury town, although admitted availability was very thin.

Owners at The Blue Pub and Brown Pub in Methven have offered rooms to affected families free of charge.