A surge of New Zealand visitors to the West Coast over summer and autumn has been a boon to communities missing the dollars usually injected by overseas tourists. 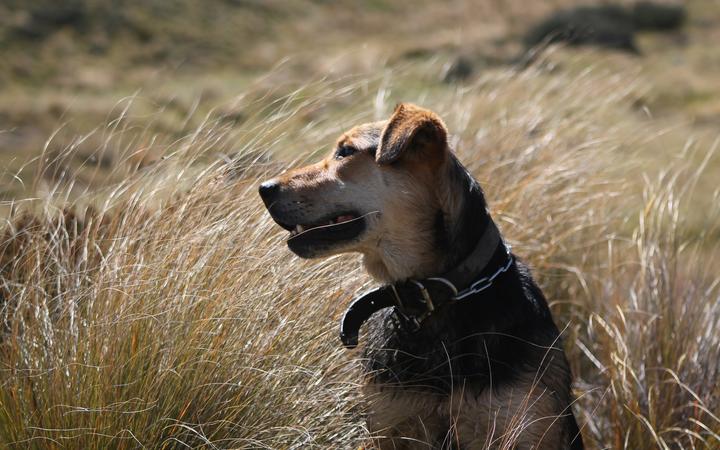 Greater domestic tourism on the West Coast has also meant an increase of canines in conservation areas. Photo: RNZ/Sally Round

Many of the domestic tourists come with their dogs however, a problem for a region rich in vulnerable wildlife.

New Zealanders in motorhomes are flocking to remote corners of the West Coast with their pets and expect to be able to take them on walks and adventures, the West Coast Conservation Board has heard.

Board member Barry Hughes, who runs a kayaking business at Ōkārito, said there had been an increase in New Zealanders taking dogs into sensitive areas.

"Dogs are fine around Ōkārito village, we have a green area for them to play and enjoy some exercise, but we've had reports of dogs being taken on forest walking tracks and they are a risk to our rowi (Ōkārito kiwi)."

Rowi, the rarest brown kiwi, are found only in Ōkārito forest and conservation efforts have grown the population from just 165 birds in the 1990s to about 600.

"We are grateful to see more New Zealand tourists and it's natural they will want to travel with their pets but we're surrounded by kiwi territory and national park where dogs are prohibited."

"There was one killed in the wildlife refuge in Jackson Bay and another down on Haast beach ... some people are going out fishing and leaving their dogs loose on the foreshore."

Council signs telling people where dogs were prohibited or had to be on a lead were being ignored, and the penguin trust was working with the Department of Conservation to see what more could be done in the way of education or enforcement, Perkins said.

Hughes said a balance was needed to meet the needs of communities and their visitors and dogs without endangering biodiversity.

"I don't think we can continue forever to ban dogs in national parks ... we actually included some rules to allow dogs in a few areas in our draft plan for the Westland Tai Poutini National Park and we had strong support from people in Franz Josef and Fox Glaciers."

The Conservation Act offered some flexibility with the possibility of special zones, but the National Parks Act prohibited dogs completely.

Resolving that conundrum would be a matter of time and resources, Davies said.