His street art is everywhere in Auckland, from the America's Cup Village and Silo Park to community centres and bus stops. But the man behind the spray can is also an inspiring ultramarathoner who's helping others in their weight loss battles. 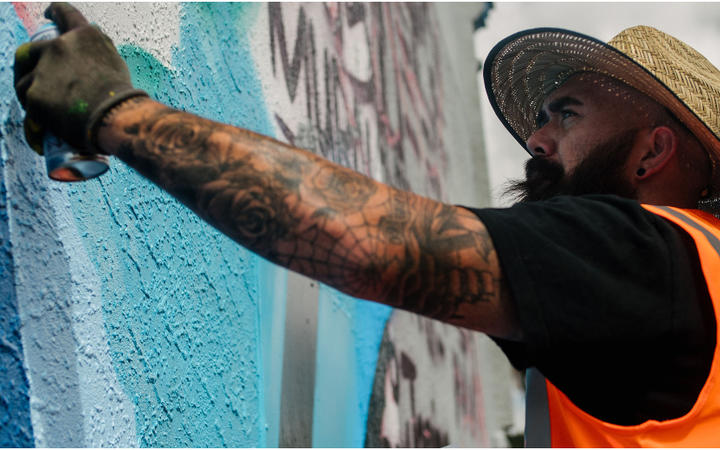 Charles Williams is someone who doesn't follow the usual stereotypes. Photo: Supplied

But Charles Williams is someone who doesn't follow the usual stereotypes.

Over the last 20 years, Charles and his wife, Janine, have become some of Auckland's most well-known muralists, with their works adorning hundreds of public spaces and council facilities around the city with unique combinations of bright, bold designs coupled with dramatic depictions of native birds.

The pair's most prominent works include pieces for Auckland Council at Silo Park and in the America's Cup Village, but they have also painted smaller projects like a bus stop in Māngere Bridge, inside the Tōia Ōtāhuhu Recreation Precinct and the outside of Papakura Art Gallery. 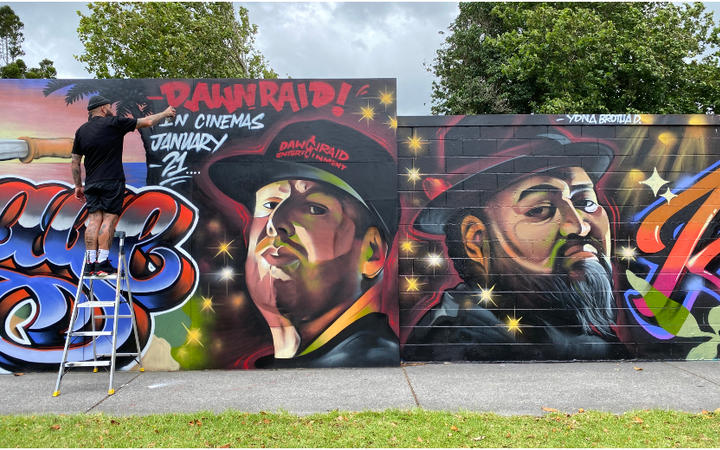 But instead of spending Valentine's Day taking it easy after a week of painting, Williams was coming to the end of a gruelling 19-hour, 102km ultramarathon in Rotorua. He says painting and long-distance running give him a unique way to enjoy his other passion - bird-watching.

"I'm a bird nerd, so the crossover is pretty cool, in that I get to paint birds with my wife and then I get to hang out with them a lot while I'm running in the bush." 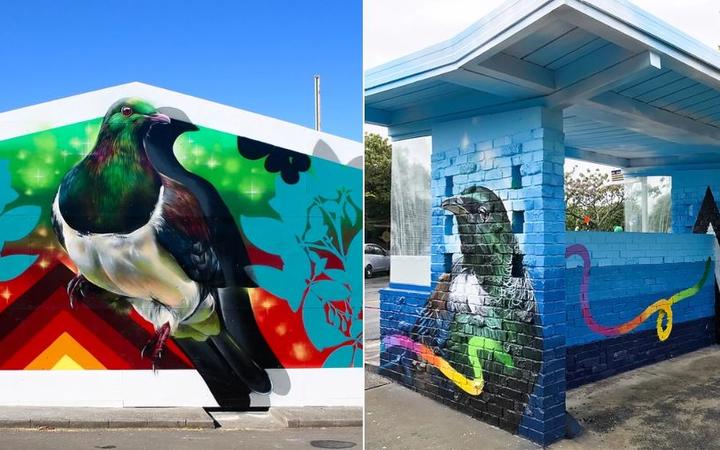 Charles and Janine Williams have painted countless buildings and public spaces, including the Papakura Art Gallery, left, and a bus stop in Māngere Bridge. Photo: Supplied

Another similarity between his sporting and artistic pursuits are the powers of concentration and attention to detail needed for both disciplines.

"You need endurance for both painting a mural and ultramarathons and there's also the level of detail you've got to have for both. For long-distance running, you can't just put on some ordinary shoes, socks, T-shirt and shorts and then run 50km. There is a whole list of things you have to make sure you've done and have with you. If you don't have that level of detail sorted - you won't actually make it."

'A bit of carnage out there'

Williams' latest event, the Tarawera Ultramarathon, started at 7.30am on 13 February and consisted of rocky trails, narrow tracks and ledges through the lush native forests between Kawerau and Rotorua.

"I got in at about 2.30am, so for about six hours you're running in complete darkness - it's out of this planet," he says. "There's tree roots everywhere so you're just focused on putting one foot in front of the other. The chances are so high of an injury and you're going past people who are just basically crawling, so there was a bit of carnage out there."

Williams, who fell over twice and almost slipped down a cliff, says it was "harder than I thought it would be".

"It's super-duper tough. You're running off-road and the trails aren't like running around Ambury Farm or Tōtara Park. They're more like mountain bike tracks and the elevation is 1500m plus, so it's like running up Māngere Mountain 15 times."

Williams, who's of Ngāti Kahungunu, Ngāi Tūhoe and Ngāpuhi descent, says being 193cm (6ft 4in) and Polynesian marks him out from the other ultramarathoners.

"There's 2500 runners at the event but you could count on two hands the number of Māori and Polynesians that were there."

And he admits his entry into such an event would have seemed pretty unlikely as a teenager. Williams began doing graffiti as an 11-year-old, resulting in multiple run-ins with the law, and given he was on the heavier side, he went by the nickname "Phat1", pronounced "fat one".

"When we were young 'phat' meant you were cool and I was also quite a big guy, on the fatter side, so I didn't mind it growing up - I kind of owned it." 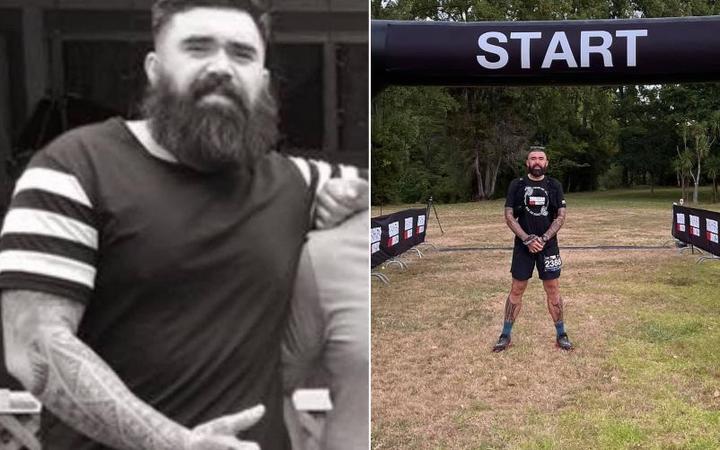 Before and after: Charles Williams at his heaviest, left, and at the start line of the 102km Tarawera Ultramarathon. Photo: Supplied

Williams made the transition from notorious tagger to street artist after attending a council-run workshop at the Corban's Estate Arts Centre.

"I grew up all over the North Island. I was into graffiti and tagging, but when I came up to Auckland I did a couple of workshops in Henderson and it showed me how I could develop my graffiti into art. I just got more into it from there. I've been doing [legal] street art now for the last 20 years or so."

Taking up running, however, has been a much more recent development.

"I started my journey of weight loss about three years ago. I was 139kg - that's pretty much a normal size of a guy in South Auckland. But for me I wanted to go on a journey to become healthier so I started running," says the Manurewa resident, who now tips the scales at 107kg.

He started doing smaller distances but built up his fitness levels to such an extent that he's been able to complete a number of marathons, including the famous New York Marathon in 2019.

"As I started losing a lot of weight, I also began entering marathons. The first was the Taupō Marathon - it actually broke me. I ran a good time for me, but the process was horrible - and so then I started doing more research into running and nutrition and how to stay a lot more healthy. I eventually did my first ultra, which was a 50km off-road one, and after doing that I fell in love with running in the bush."

Williams says finishing the 102km event brought a mix of relief and satisfaction, but he also gains a lot of enjoyment seeing others tackle similar weight-loss challenges.

"I know that my running has inspired others to go on their own health and fitness journey," he says. "Some ran the New York Marathon with me, some have run the 50km Tarawera Ultramarathon and another is cycling the whole of New Zealand next year because of that inspiration."

And what's his advice for others?

"To start your own health and fitness journey just start small, maybe with walking first and give heaps of focus to your eating, then slowly but surely your results will come."