Candidates for the Māngere-Ōtāhuhu Local Board by-election made their final pitch to voters on Wednesday night with a range of creative and outrageous proposals, including "shower buckets" for every resident and cash rewards for vigilantes. 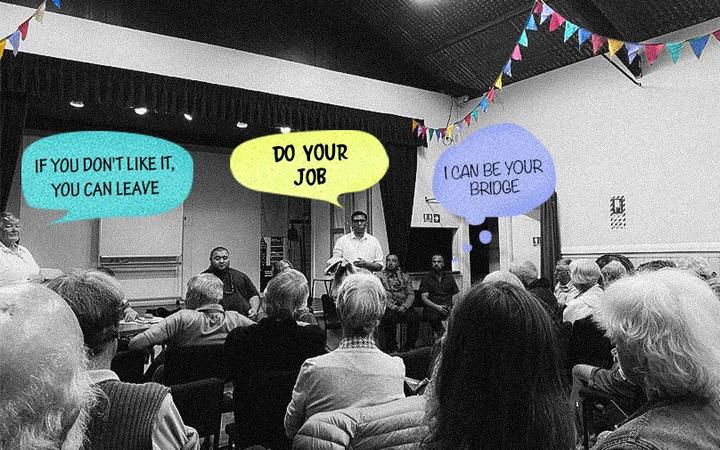 Candidates for the Māngere-Ōtāhuhu Local Board by-election made their final pitch to voters on Wednesday night at the St James Church hall in Māngere Bridge. Photo: Justin Latif / Tina Tiller

The prospective politicians were speaking at a local resident and ratepayers' association meeting in an effort to claim a spot on the seven-person local board, for which voting closes at midday, 17 February. The by-election is being held to fill the seat vacated by Anae Neru Leavasa after he won the Takanini electorate seat at the general election last year.

Unlike previous meet-the-candidate events held in central Māngere and Ōtāhuhu, there were fewer Pacific faces in the audience for the event at the St James Church hall in Māngere Bridge. The ethnic makeup of this seaside village is just one way it differs from its neighbours. The average house price in this corner of Māngere is about $200-300k higher than in other parts of the local board area, and pertinently to this election, it's also known as a stronghold for right-leaning local board candidates.

After a campaign that kicked off with allegations of dirty politics, the crowd of around 150 may have expected some thunder and lightning between candidates to match the heavy storms that swept the suburb earlier in the day. However Val Payne, the chair of the Māngere Bridge Residents & Ratepayers Association and the MC of the evening's event, made it clear it was to be an orderly discussion, issuing a warning that if those present objected to the format, "they could leave". She also asked candidates to focus on local board issues, rather than "homelessness, hungry children and mental health", which in her view were the responsibility of central government.

Conspicuous by his absence was Labour's Papaliitele Lafulafu Peo - and maybe it was just as well given the amount of criticism directed at Labour. Those present included independent candidates Elnez Tofa, Sharon Bragg, Christian Malietoa-Brown, plus the NZ Outdoor Party's Phil Bridge and Communities and Residents' Malcolm Turner.

The most energetic of the five was Malietoa-Brown. He promised to be someone who would "stand up" to the existing local board members, council staff, mana whenua and even the police, who he blamed for the increase in unlicensed dirt bike riders in the area.

"If you have someone who can stop these motorcyclists I will give them $20. The first step is the community taking a stand - so you need someone to tell the cops, 'do your job'."

Bridge also spoke passionately about a range of issues including Auckland's poor transport system and council's spending largesse. One of his cost-saving ideas was for all residents to use a bucket to collect shower water to reuse when flushing toilets, something he said could save large households up to 90 litres of water a day.

"I will be your 'bridge' between the community and council," he said. "And if elected I'll make sure new housing developments have grey water systems and water collection tanks."

Turner, who earlier this month accused Peo's supporters of illegally collecting postal ballots, was in a more reflective mood. He got choked up sharing a riches-to-rags story of how his wealthy farm-owning family fell on hard times and came to Māngere with only a single suitcase each. He promised to be a local board member who would speak up for others experiencing similar difficulties.

"The decision-makers aren't listening. But I want to see integrity win and that's why I'm here."

Bragg caused a stir with her claim that Māngere Bridge was once known as "black bridge" because of its reputation for crime and rundown houses - a claim disputed by a number of audience members. Bragg's main point, however, was that she'd fight for more council investment in Ōtāhuhu.

"You changed this area from 'black bridge' to Māngere Bridge and now it's beautiful here. But 'black bridge' is what Ōtāhuhu is like now, so it needs a community effort to make a change."

Despite Payne's earlier warning against discussing issues best addressed by central government, Tofa spoke about the mental health needs of the community, pointing out that local boards have the discretion to redirect funding to certain problems. He promised to focus on "the elderly, youth and those with mental health issues" with "programmes and initiatives that serve our community".

Despite the raft of promises, the audience seemed most impressed with the tough-talking Malietoa-Brown, who the other candidates seemed happy to let answer the majority of the questions. As the night drew to a close, Payne reminded those present that the best way to have their voices heard was to vote.