A Wairarapa fly-tipper found the perfect "bureaucratic no-man's land" to dispense with hundreds of kilograms of their unwanted furniture last weekend, and avoid a fine of up to $30,000. 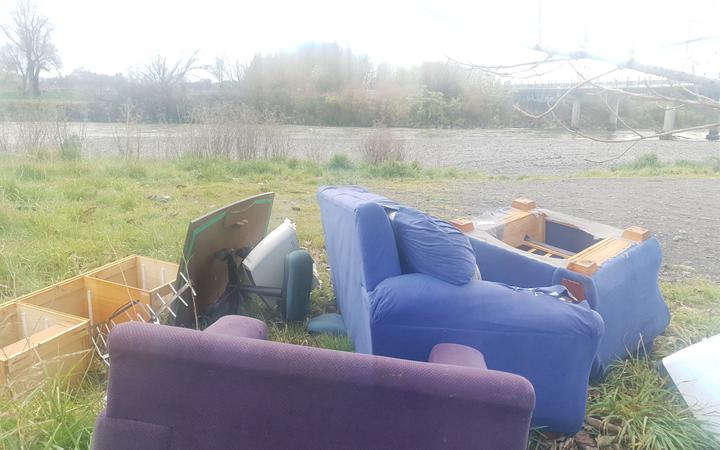 Dumped furniture, near the Waiohine River, near State Highway 2, between Greytown and Carterton. Two Wairarapa district councils, Greater Wellington Regional Council, and NZTA all said clearing the furniture was not their problem, before Carterton council workers cleared up the mess. Photo: Supplied

The mystery litterer will likely escape any prosecution for dumping household items in the area close to the Waiohine River and State Highway 2, between Greytown and Carterton.

Among the dumped load was a couch, a stand-up fan, drop leaf table, two separate armchairs, a television, and other rubbish including bottles and pieces of wood.

Either by accident or design, they picked the perfect place for any local or national authorities to take responsibility.

Confusion reigned after complaints started coming in on Monday when the furniture was sighted by members of the public. Not as to who dumped it - still unknown - but as to who should clean it up.

As originally reported in the Wairarapa Times-Age on Wednesday, the land is South Wairarapa District Council (SWDC) territory.

The council however believed it was the New Zealand Transport Agency's job, because of where the load was dumped.

The agency's communications manager Jasmine Sullivan said it was outside of their boundary and "probably part of the river, managed by either Greater Wellington Regional Council (GWRC) or South Wairarapa District Council".

GWRC spokesperson Matthew O'Driscoll told the Times-Age if the furniture had been dumped a little bit closer to the river it would have been something they would have to investigate.

"Greater Wellington would only be involved if there were serious environmental risks that needed investigating."

On Thursday, the newspaper's editorial called the situation "simply comedic".

Ultimately it was CDC who stepped in to remove the eyesore. Staffers cut through the red tape to solve the problem.

The council was made aware of the rubbish on Tuesday morning but did not immediately remove it as it was outside the Carterton district lines.

However, realising the rubbish was still there in the afternoon, they took action to get it cleaned up.

CDC's Angela McMenamin put through a service request to get the rubbish removed, despite knowing it was outside Carterton's boundary.

"We help wherever we can, just to be helpful to the community," she said.

"In this case, we knew about it and it could be seen from the road, so we decided to do it."

Phil Maybury, one of the council's Parks and Reserves team, was more than happy to get the job done.

"He [his boss Clinton Thompson] asked me to do it and I just said, 'ka pai'. 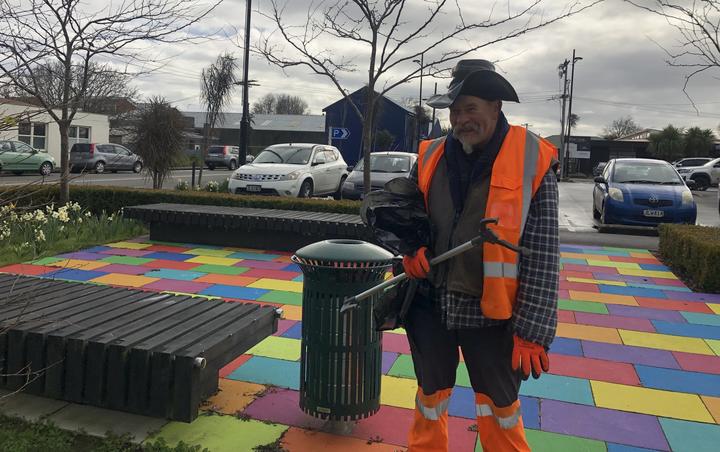 "I've picked up rubbish from that site before. This load could be seen from the north heading south and it was quite obvious because it was brightly coloured."

Maybury said it did not reflect well against the district's mountain ranges in the background.

"There were at least three drop loads worth of rubbish there," he said.

Serious offenders may also be prosecuted under the Litter Act 1979 with a maximum penalty of $30,000.

While boundaries remained intact, Wairarapa Resource Centre Re-use Shop manager Trudie Jones said there was absolutely no excuse for dumping rubbish by a riverbed and doing so was "just plain ignorance".

The shop operated six days a week and made pickups from household addresses.

"We would have definitely picked it up and definitely taken the goods because that's our philosophy."

Jones said if legal dumping wasn't an option because of cost there were Wairarapa Facebook sites offering goods for free.

"They are designed to help people in this predicament," Jones said. "Before you get to that stage - if you had it in a vehicle it would have been just as easy to deliver it to somewhere like the re-use shop."