An 18 month-long stoush over plans to shut off an entrance to a busy car park in South Auckland has come to a head between business owners and Auckland Transport (AT). 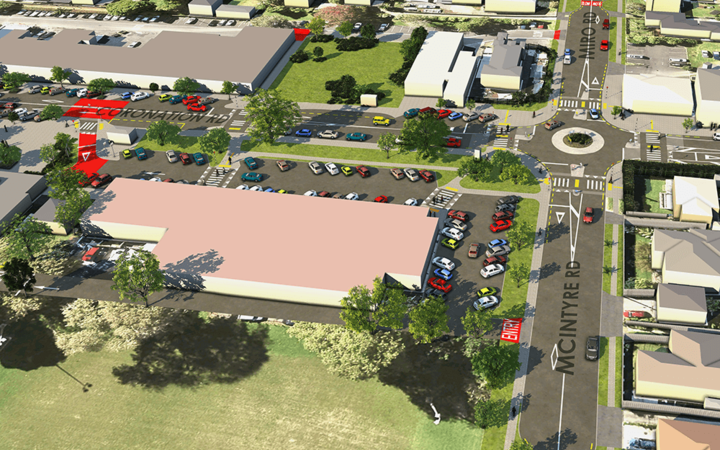 An artist's impression of improvements to Māngere Bridge village. Photo: AT

Māngere Bridge is undergoing roadworks as part of AT's Safer Communities programme, which seeks to improve road safety and, as part of the works, it wants to install a pedestrian crossing on McIntyre Road.

The issue is complicated by the fact it would be directly adjacent to one of the entrances of the free council-owned car park at shops along Coronation Road and, as a result, AT wants to close it.

The business association is opposed to the plans, claiming it will increase congestion at the second entrance, and it has been locked in talks with AT over it for the past 18 months.

AT's website states changes to roads in the Māngere Bridge village area, which started in March, are designed to improve accessibility and safety for pedestrians.

A visit to the car park in question on a Wednesday morning showed it was busy, with cars queuing to get a park and some motorists showing signs of their frustration.

One business owner, who wanted to remain anonymous, said with vehicles coming in and out dropping off goods all day to the shops, AT's plans to reduce access would make things chaotic.

He said the businesses wanted AT to move the second entrance 10 metres down the road, which would keep everyone happy and allow the council-controlled organisation to have a new zebra crossing.

"We've had 18 months of consultation over this and every time they've said they are listening to us, but then they come back with the exact same proposal."

He said AT came back to them on Tuesday to tell them it was going ahead with its original proposal.

"I don't think this is going to make the village any safer."

Pauline Anderson, chair of the Māngere Bridge Business Association, said she had been surprised at the lack of communication from AT with businesses.

"We've expressed our concerns to them about this for the past year and a half, but the only times we have been able to meet with them has been at our insistence.

"We've had to continually keep asking them what's happening," she said. "They've been arrogant and non-communicative."

AT executive general manager of service delivery Andrew Allen said it had met with business owners to try to find a solution, but the changes must go ahead to make the town centre safer.

"In recent weeks, AT has been engaging with the owner of the local supermarket on a variety of options for the council-owned car park, including widening the entrance off McIntyre Road and options for operation of the service lane for use by the business," Allen said.

"But if the second council-owned car park entry is retained - it will be dangerous. This is necessary work, as at the moment cars queue across the intersection and it's really unsafe as visibility is blocked."