Northlanders are taking to the region's pest plants and animals around their properties during Covid-19 lockdown.

"It's very encouraging for pest control in Northland and for the biodiversity and primary production for the region," Jack Craw, Northland Regional Council councillor and biosecurity and biodiversity working party chair said. 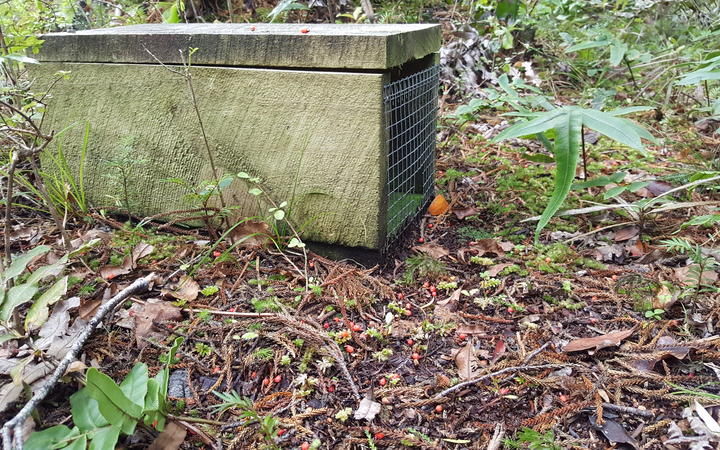 Thousands of stoat traps are being used in Fiordland to keep islands free of the voracious introduced hunter. Rimu fruits carpet the forest floor around this trap. Photo: RNZ / Alison Ballance

Craw said people were doing more pest control on their properties as they suddenly had more time to attend to pest control.

"People often do pest control work as an addition to the many other things going on in their life," Craw said.

"It's a great time to do the pest control things that need doing," Craw said.

"Now is a great time to be doing pest control around your property. Go for gold," Don McKenzie, Northland Regional Council (NRC) said.

He said it was also a good time for Northlanders to keep an eye out for new or unusual pests.

The NRC website's pest hub was a great place for identifying any of these that might come to light, he said.

McKenzie is one of three NRC biosecurity specialists who have special authority to operate as an essential service under level 4 Covid-19 lockdown.

Under this, biosecurity was deemed an essential service only in the case where a pest that was new to New Zealand turned up. Councils would then support a Ministry for Primary Industries-led response to such an incursion.

McKenzie said the arrival of a pest in Northland that was already found in other parts of New Zealand, would be dealt with on a case-by-case basis. This response would depend on a range of factors including how much of a risk the pest posed to the region.

He said as a result of level 4 Covid-19 lockdown none of NRC's 27 biosecurity staff were working out in the field carrying out their work as they usually did. They were now office-based, offering pest control support to communities from there.

McKenzie said pest control was taking place around the region, building on NRC's established approach of supporting people in their efforts.

"A number of our communities are well tooled up," McKenzie said.

High value areas such as Mangawhai, Tutukaka, Whangarei Heads and the Mid North already had established very good pest control. They already had traps and bait stations and were into a good pest control routine. People could then continue with this on their own properties.

"Private landowners can do a lot to keep the battle going," McKenzie said.

Possums, stoats, feral cats and rats were among pests being targeted.

Protecting kiwi in the region would be a major benefit od these eforts. Another would be contributing to an increase in native forest birds - such as kukupa, fantails and ruru - and rare species such as pateke (brown teal ducks).

Weed control work could also continue as was the case with work being done with wild ginger on properties such as at Whangarei Heads.

"In these lockdowns we can't get out together in our usual community groups, but weed control can still be done individually on our private properties and is extremely valuable," McKenzie said.

It was important community pest control groups unable to go out and work together on pest management kept in touch with each other in different ways through the lockdown, he said.

Craw said Northlanders needed to be the eyes and ears of the region when it came to Northland's pest control mission.

Northlanders should report any sightings of wallabies, rainbow lorikeets, bearded dragons and ring-necked parakeets to the council's environmental hotline.

Northlanders could also keep an eye out for red-eared slider turtles. There had been sightings of these in Northland.

People at times released them into the wild when their children had grown up and left home and outgrown keeping a pet of this type in a home fish tank. The turtles posed a huge potential risk, particularly in Northland's warmer waters. They might live on for 20 years after release and ate koura (native freshwater crayfish) and native freshwater fish.

McKenzie said the lockdown was also good news in the fight against kauri dieback.

There would be fewer people walking in and using areas where kauri dieback was or could potentially be a problem, therefore reducing the risk of its spread.