Residents at a Fenton Park retirement home are petitioning the council over a recent influx of heavy vehicles using their street.

Campbell said her neighbour was "extremely stressed" due to the shaking and noise from the heavy vehicles.

"I don't mind the busy street, but... there needs to be a boundary as to what can zoom up and down our road."

A petition with 50 signatures organised by the village's residents' association is calling for the council to act.

Glenbrae was in a medium density residential zone wedged between commercial zoning to its east and industrial zoning to the northwest, according to the council 2016 district plan.

Campbell and fellow resident Graham Winter also noticed heavy vehicles banking up, parked one behind the other, on the berm across the road from the retirement village.

The pair believed the nearby Vehicle Testing NZ (VTNZ) station was using the berm as overflow parking for clients.

Campbell said heavy vehicles had been known to park there for up to three hours.

Both Campbell and Winter's preferred solution was chicanes - bends to slow traffic - or to have the road blocked off at one end. 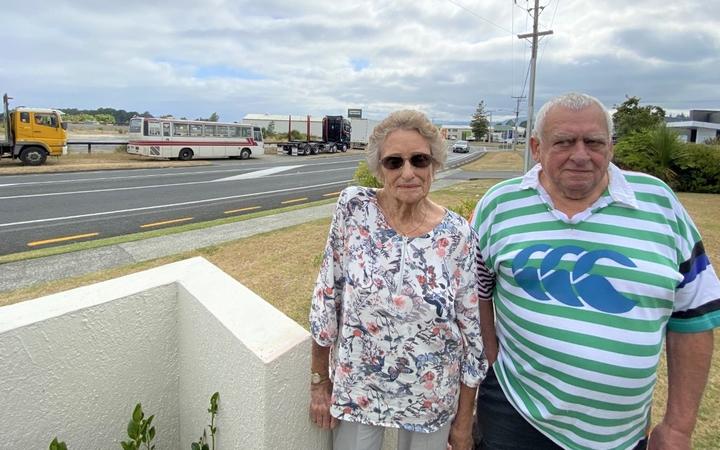 VTNZ general manager operations Gavin McNaught said the Marguerita Street VTNZ was the only heavy vehicle inspection site in the Rotorua area, resulting in a surge in demand.

The "number one priority" was to ensure heavy vehicles were safe on the roads, he said.

"We will not compromise on the speed or quality of inspections."

McNaught apologised for any inconvenience to customers or nearby residents in the meantime.

Council infrastructure group manager Stavros Michael said the council is aware of the issue but a solution will take time.

He said he was aware of concerns from residents regarding traffic volumes.

He said the council was developing options for Marguerita Street but there was a "process that needs to be followed".

Any major road reconfiguration would require approval from elected members and community consultation.

A council spokesperson confirmed the berm was council-managed and vested as road reserve.

The spokesperson said trucks parking on the berm were illegal and being dealt with by i-Park.

Arvida spokesperson Tristan Saunders said said the company's approach was resident-led but the company was "150 percent supportive of any resident concerns".

Employees had placed the petition in a central location so it would be easy to access for those who wanted to sign it.

He hoped the petition would elicit a "satisfactory outcome" for residents but if not, Arvida would look to facilitate a meeting between the council and residents.

"We will wait for the next stage," he said.