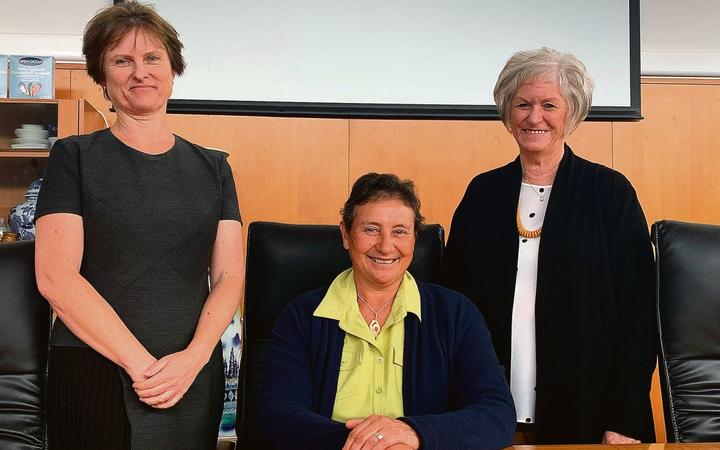 Ms Riesterer said she was proud to head an all-woman leadership team and found women's leadership to be more collaborative and holistic.

"Our council is very diverse and is approximately half female, half male, half Māori and half Pākehā," Ms Riesterer said.

"I do notice a difference in that women do a lot more listening and are more open to considering other points of view and to changing their minds on a topic. I enjoy leading a mix, though, as it is important to have a mixture of viewpoints."

This is something Opotiki council chief executive Aileen Lawrie has also noticed during her time with the council.

Mrs Lawrie has seen a range of personalities move through the council rooms and has noticed that when women are in charge there are fewer arguments, less tension and decisions were made with a less combative approach.

"Women are more strategic and accommodating, they check decisions from all perspectives," Mrs Lawrie said.

"We as women are more inclusive, it is very rare to find a female leader who is not inclusive."

Mrs Lawrie said being a woman hadn't held her back in her career, but believed women needed to work harder to get ahead.

"Throughout my career, I have found that I am the only woman in a meeting, I wouldn't notice it at the time, but on the drive home I would realise I was the only female voice in that room," she said.

"Nowadays there is less out and out sexism, it is more of an unconscious bias, especially when it comes to the gender pay gap.

"At the beginning of my career, I was paid less than a man with the exact same qualifications and exact same experience as me."

Mrs Lawrie said she now made a point to ensure that there was equity across the council when it came to pay grades.

She said she had also noticed men were more likely to request additional training or a pay rise than women and she tried to ensure all staff were given equal opportunities regardless of whether they had approached her or not.

"I have noticed during my career that when women make a complaint they are not treated seriously and it then counts badly against you," said Mrs Lawrie.

"While it might hinder you, you have to do it for the people coming through."

During her career, Mrs Lawrie said there were three men who were instrumental in helping her get ahead. She said it was significant that all three had daughters of their own.

Despite flying high in her career, Mrs Lawrie said she was held back in extra-curricular activities such as playing the cornet in brass bands.

"For years I was in the national youth band but wasn't able to progress further as many top bands at that time wouldn't accept women," Mrs Lawrie said.

"When I was at school, I also played with the Marlborough Boys College band, I know that annoyed a few people because they didn't think a girl should play alongside the boys."

Deputy mayor Shona Browne said she had also faced discrimination in her career but hadn't allowed that to hold her back.

When she told her father she wanted to get into insurance he replied that it wasn't a job for women. However, she soon proved the doubters wrong and although she was the only female salesperson, she became the top performer at the company.

"I never felt any intimidation, but I did feel I had to work harder to prove myself," Mrs Browne said.

Mrs Browne was also employed at the telephone exchange, which at the time had a large gap between when men and women were paid, but this was rectified by the union at the time.

Ms Riesterer said as a proud feminist lesbian she was now into "positive discrimination".

"I positively discriminate on the side of women," she said.

"I am interested in bettering women and helping them move forward with their careers."

All three women said they didn't consider themselves role models for the young women in their community but said women in high positions automatically became role models, whether they wanted to or not.

"As a woman, you have to lead the way and push through for the others coming up," Mrs Lawrie said.

"Regardless of whether they directly consider you a role model or not, that's what you are."

*This story was corrected on 21 November. The original article said Opotiki Council had the country's only all-woman leadership team.