A grass runway at Hood Aerodrome has been closed after Masterton District Council commissioned an independent aerodrome operation review following the fatal mid-air collision in June. 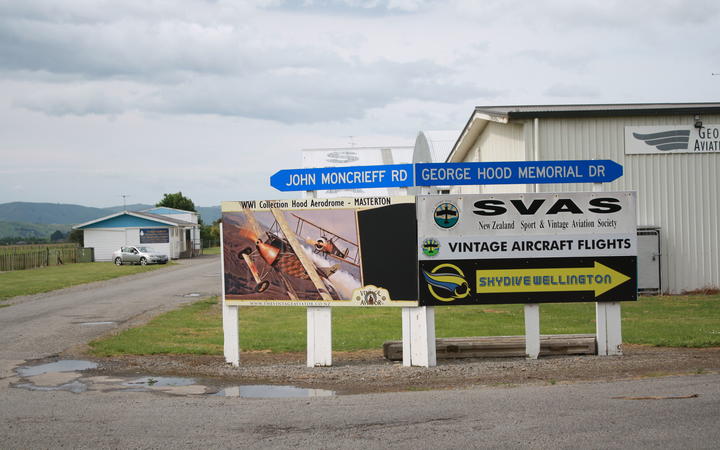 The closure is to eliminate the risk of a non-standard arrival or departure. The runway is one of three parallel runways at Hood. It is the only one of the three with a clockwise landing circuit, the other two run counter-clockwise.

This has led to instances of pilots executing illegal turns onto the now-closed runway counter to the published rules for its use.

A report which will be discussed at the council's Audit and Risk Committee meeting on Wednesday said since the accident "we have issued two safety notices to operators".

Despite these notices the aerodrome manager has observed non-standard circuits and landings by local pilots.

These were actively managed at the time but there remains a risk that some pilots will not follow the published procedures.

Skydive Wellington pilot Joshua Christensen, 20, and Wairarapa Aero Club member Craig McBride, died after their aircraft crashed after colliding whilst airborne near the aerodrome on the morning of 16 June. Both were Masterton locals.

The Civil Aviation Authority (CAA), police, coroner and Transport Accident Investigations Commission (TAIC) investigations of the accident have not yet been completed and are independent of the operation review commissioned by the council and completed by Mike Groome.

Mr Groome was chief executive officer of the Taupo Airport Authority for 12 years and owns AvSafe Consultants Ltd. Scott MacKenzie of Pappus Ltd, was also engaged to facilitate an impartial survey and workshop with aerodrome users to generate user suggestions for improvements.

Masterton's aerodrome has no air traffic control, no scheduled air services, has a main sealed runway and three grass runways used by commercial and recreational users - including vintage aircraft. It has one part-time manager.

Council Chief Executive Kath Ross used powers she has to close the short grass runway to the west of the main sealed runway last Wednesday, two days after a meeting with users.

"The Masterton aerodrome is not extremely busy by aircraft movements, but due to the differing types of activity is reasonably complex, plus it has multiple runways," the report said.

The review findings were presented to the Hood User Group (HUG) on 11 November.

Seven council staff attended the meeting, including Mayor Lyn Patterson and deputy Graham McClymont. The users generally accepted the findings, in particular, the closure of the grass runway. Users said they found it to be convenient but not critical.

The safety review also said there was a strong argument for a Common Frequency Zone (CFZ), with a separate radio frequency around the Masterton area, so that the traffic operating at Masterton was not interrupted by radio traffic from aircraft operating in other parts of the east coast.

This will be discussed with the CAA.

The report said an alternative to the CFZ would be a Mandatory Broadcast Zone (MBZ) but this would be very restrictive on Masterton as it would not allow the vintage aircraft, which have no radio, to operate within the MBZ.

A more robust schedule of user group meetings is also suggested as well as new fencing on Moncrieff Drive.

The AvSafe review found the aerodrome is well managed and is compliant with regulatory standards.

It recommends the implementation of a Safety Management System, and an amendment to the Published Aerodrome Procedures to reflect what is required of the taxiways.

It also recommends a Memorandum of Understanding (MoU) between the various operators, stating very clear procedures for each type of operation. This MoU is to become binding on each of the signatories.

The council will be asked to retroactively approve the closure of the short grass runway known as 06L/24R.

"The aerodrome is well managed and is well presented … I can find no evidence that any of the processes or procedures, as published by Masterton District Council, as operators of the Masterton aerodrome, create any greater risk to aircraft operations or the public, than would normally be accepted," Mr Groome found.

Hood is owned and operated by the council. It is a non-certificated, uncontrolled aerodrome.

For a non-certificated aerodrome such as Masterton, starting down the Safety Management System route would be a good starting point, making it much easier to meet the regulatory requirements, if in the future it was decided to become certificated to cater for an airline which wished to service the region, the report said.

The airspace is known as Class C airspace, where airspace below 9500 feet, is uncontrolled, and available for anyone to use. A clearance from Air Traffic Control is required to enter the airspace above 9500 feet.

This same uncontrolled airspace extends from Cape Palliser in the south all the way up the east coast to Havelock North in the north. The radio frequency for this expansive area is 119.1 Mhz, therefore aircraft operating at the extremities of the airspace would quite likely hear radio calls made at Masterton and vice versa.

Because of this situation there is a strong argument for a CFZ, with a separate radio frequency, around the Masterton area, so that the traffic operating at Masterton is not interrupted by radio traffic from aircraft operating in other parts of the east coast.

"It is quite conceivable, as this Class C airspace is uncontrolled, an aircraft could fly over the top of the Masterton Aerodrome at above 1500 feet, which is the upper level when joining the circuit, without anyone knowing they were there," the report said.

Good aviation practice suggests, that any aircraft operating within five nautical miles of an aerodrome should make a radio call on the local frequency, letting all traffic in the area know their intentions.