A secretive group excavating a cave they believe is filled with a race of pre-Polynesian giants' skeletons have iwi and archaeologists worried. 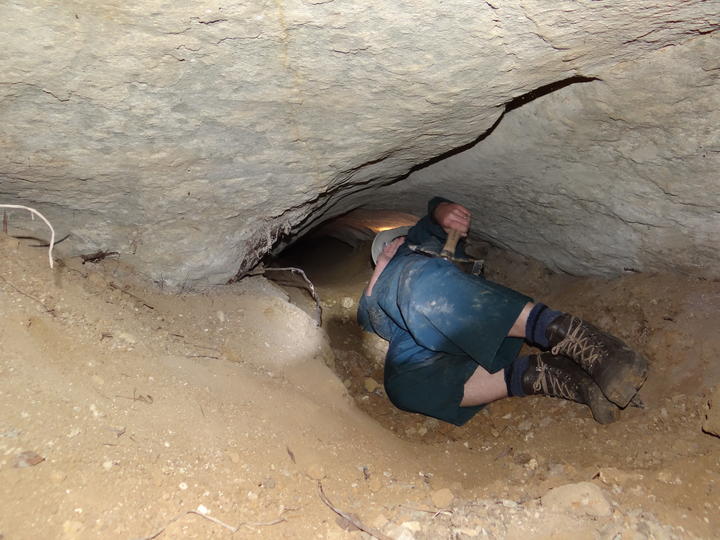 Archaeologists say a group of people tunnelling into the side of a country road in search of a race of pre-Polynesian giants' skeletons could be damaging the archaeological record.

A representative of local iwi, Ngāti Taahinga, who have tīpuna and taonga buried in the limestone-rich north Waikato area's caves, has described the group's actions as "disturbing".

RNZ understands one member of the group is a caver, but none are trained archaeologists.

Since 2016, the group has recorded progress of the dig by sharing photos, videos and written updates on a blog that has been viewed more than 88,000 times.

Otago University associate professor of bioarchaeology Dr Siân Halcrow worries about the number of people who might come across the blog and believe the information being put out on it.

"It does really highlight what some New Zealanders think, in terms of pre-Māori conspiracy theories, with really racist undertones. It's not grounded in fact, so people should be aware."

Though the group has tried to keep the location of the cave secret, RNZ has been able to confirm its whereabouts and contact the landowner, who was unaware of the dig and said the group did not have his permission to be tunnelling into his property.

The secretive group has been sporadically digging out the tube-like cave for close to four years, often under the cover of darkness. They are yet to find any real evidence of the supposed giants they call the "tall ones", although they say they have already found several bones in the cave.

The group has determined one is the leg bone of an 8 foot tall human and could be up to 2500 years old. "This here, my friends, is a human bone of a pre-Polynesian inhabitant," a male voice says in a video of the hollow bone posted online by the group. "You can tell by the triangular shape. It's most likely a tibia, which would make this… individual 8ft 4 inches tall… Regardless of its length, this is an older bone than any human being in New Zealand. What do our detractors say now, we wonder?"

Experts say the bone probably belongs to a moa. 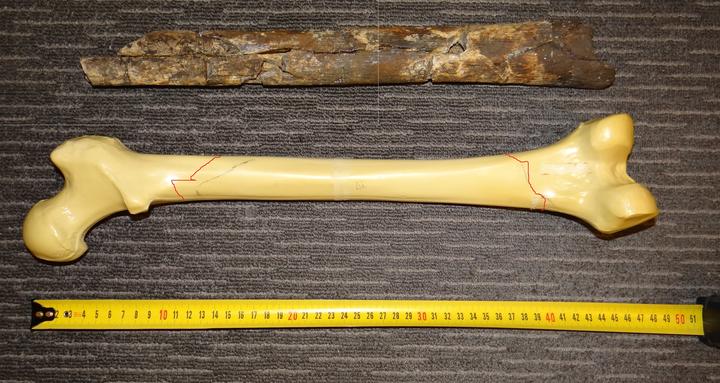 The group say this bone belongs to a giant pre-Polynesian human and could be more than 2500 years old. Experts say it's likely from a moa. Photo: Supplied

The lack of evidence hasn't hampered the enthusiasm of the group's apparent leader, who does not reveal his name online but goes by the initials 'IJ'.

"Providing proof of 8' humans to the world will be bigger than finding Tutankhamen," he tells RNZ, via email, adding that the discovery will be "the most talked about worldwide story of the millennium."

A spokesman for Heritage New Zealand - the government entity tasked with protecting New Zealand's historic and cultural heritage - is less excited. Although it's illegal to modify or destroy any part of an archaeological site without authority from Heritage New Zealand, the spokesman says he has "no reason to believe that the purported cave is an archaeological site". In other words, the experts don't think the cave contains any evidence of pre-1900 human activity - giant human bones or otherwise.

The farmer who owns the land is fuming. Despite writing on the blog that "the land owner knows and approves of what we do", the property owner told RNZ he was unaware of the dig, and the group did not have his permission.

There are many myths, rumours and oral histories pertaining to what lies beneath the crumpled farmland that spreads along the west coast, between Port Waikato and Raglan. Some are more far fetched than others.

Al Mannering, who grew up on a farm in the Waikaretu Valley where the tunnel is being dug, recalls stories of a pou whenua (carved wooden post) being found near a sharp bend when the road was cut, which he says may have signified a nearby urupā. He also recalls seeing a human femur about 2cm longer than his own. "And I am 6ft." 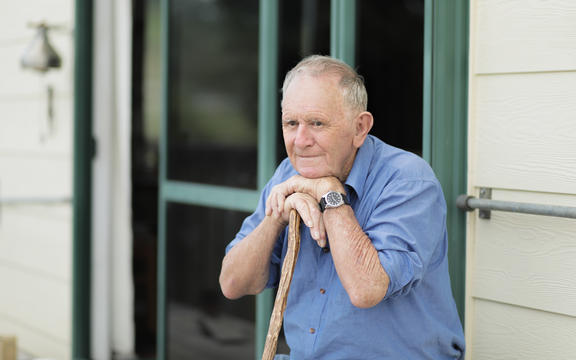 Another story comes from 88-year-old Maurice Tyson, who has lived in nearby Tuakau since he was a teen. He tells of a 'crypt' filled with 14 or more 8ft tall skeletons being uncovered by road workers, then quickly reburied by archaeologists, as part of a wider conspiracy to keep New Zealand's true history a secret.

Tyson doesn't claim to have seen the skeletons, or their reburial - but says the story was told to him by the road workers who found them. He has multiple theories about who the skeletons belong to - from victims of the Spanish flu to WWII Japanese soldiers.

On self-proclaimed "astro-archaeologist" Martin Doutre's CelticNZ website, an article describes a tribe of tall "Aztec type Maoris" [sic] referred to as the "Tall Ones" who lived in north Waikato caves and were eaten to extinction. The article mentions a "secret burial cave" that is "packed with the dead of the tribe."

It is these stories that seem to have inspired IJ and his crew, (who use the initials BM, YM, RL Davidson and MD on their blog,) to tunnel into the limestone cave in a bank on the side of Waikaretu Valley Rd.

"In the following pages and over the next three years or so you will find digital photos and information, along with video, that will prove that the 'tall ones' actually existed and that they were here long before Maori ever arrived and took the land from them," the blog reads.

"Maori, as we know them, did not possess an empty land as taught in the school books these days or as printed these days in the media - Polynesian's, in fact, came to a land already occupied and then they conquered it [sic] … What is inside our cave, when we finally reach the cavern part, will eventually prove this".

Though some believe the group is motivated by racism, Eru Whare of Ngāti Taahinga, who is chairman of Pukerewa Marae which is near the cave, is giving IJ and his crew the benefit of the doubt. "I wouldn't put it down to racism. I think it would be a lack of education and understanding of cultural values," he says.

But it's still hard for Whare to understand how or why something like this would be done without talking to iwi first - especially if it's human bones the diggers are searching for. "We have a number of caves back home [in the Waikaretu Valley] and there's still some of our loved ones buried in there. In our history and our culture we always talk about our bones. Where we come from, that's where our bones are. So in an urupā, or this case a cave, when you remove the bones from a place where we laid our dead or our loved ones, it removes that whole spiritual, tapu essence.

"It's very hard for our people to try and decipher why people would do such things. And whether they are looking for, you know, big giants or moas. I mean I can understand... But for guys just going in there without any consultation. Well, that's something else. That's a pretty disturbing approach."

Despite the group's raison d'etre being the search "for those here long before the Polynesian migrations occurred," there is no evidence of human habitation of Aotearoa New Zealand prior to the arrival of Polynesians. "Every professional archaeologist will tell you the same," Waikato-based archaeologist Sian Keith says.

The pervasive myth that an earlier population of Moriori was displaced by Māori has been repeatedly rejected by academics. So have suggestions that, prior to the arrival of Polynesians, the country was settled by Egyptians, Celts, Greeks, Chinese, Melanesians, or Phoenicians by people like Doutre and Ross Baker of the One New Zealand Foundation (which opposed the return of land to Māori under the Treaty of Waitangi), Bryan Mitchell who believes New Zealand was first settled by a Scottish cattle farmer in the 12th century, Ross Wiseman, Noel Hilliam, Gary Cook and former National Front secretary Kerry Bolton.

More recent stories by writer Barry Brailsford of a mystical, peace-loving, non-Māori race which colonised New Zealand 2000 years before Polynesians arrived, were described as "virulent myth" by archaeologist Atholl Anderson. As with stories of Moriori pushed to justify British colonisation, Brailsford describes the purported peace-loving race as having been killed by Māori.

"These conspiracy theories are really grounded in racist ideologies. They need to be pulled apart for what they are," bioarchaeologist Siân Halcrow says. "There's no cover up."

University of Waikato teaching fellow Dr M Dentith, who studies conspiracy theory, fake news, and secrecy, agrees. "Quite a lot of these theories are used to make some variation of the claim 'Well, if white people were here first, then the Treaty is null and void', or 'We did to Māori only what they did to our distant ancestors'," Dentith says. "My interest is largely in the kinds of 'evidence' people like this put forward in support of their conspiracy theory that the government and Māori are hiding the existence of a pre-Māori, white civilisation here." Like Eru Whare, Dentith links the prevalence of these ideas back to a lack of education about the history and prehistory of Aotearoa.

IJ and his crew appear to loosely subscribe to Brailsford's theory. On the blog, IJ writes of his belief that the "true ancient history" of this country has been "covered up, secreted away, and legislated against" by academics, iwi and archaeologists. 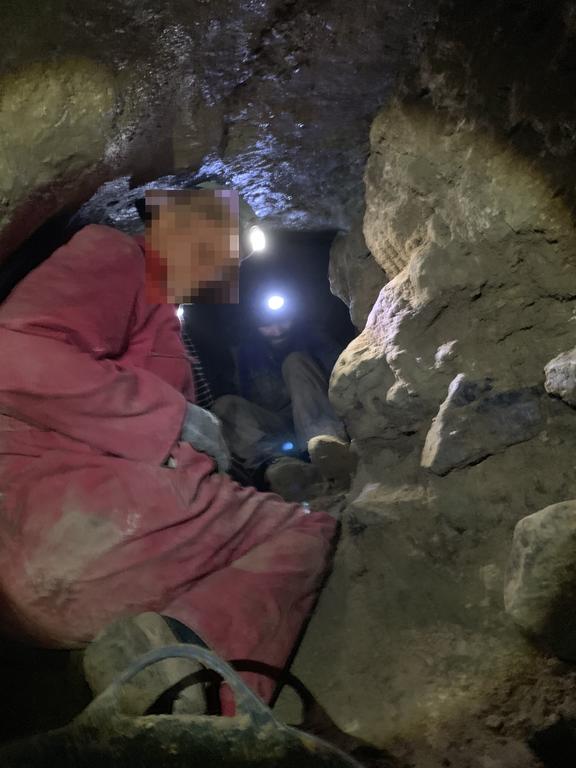 Canterbury Museum curator Paul Scofield calls alternative theories about pre-Polynesian inhabitants of New Zealand "crackpot" and says the north Waikato cave dig reminds him of a low-cost version of a Dutch-American textiles magnate's 20 year search for gold buried by Spanish pirates on Juan Fernandez Island, off the coast of Chile. But he says nothing can be done about the removal of moa bones from the cave if it is on private land, as there is no legislation protecting the extinct birds' remains.

Talk of cover-ups and academic conspiracies frustrates archaeologist Sian Keith. "One of our jobs as archaeologists is to assess, retrieve and analyse the data from historic sites," she says. "We work with tangible evidence, scientific dating, environmental analysis, and engaging with iwi and hapu who have a rich oral tradition. There are many specialists working in the archaeological field who are passionate and thorough.

"The evidence for pre-Māori inhabitants, of any origin, simply isn't there. If it was, the professional community would have identified it and it would be common knowledge. Archaeologists are not secretive, the work we do is carefully managed under the Heritage New Zealand Pouhere Taonga Act, and investigations and excavations have to be formally reported on."

It doesn't matter to the diggers. The most recent update on their progress was posted online by IJ and MD last week. They expressed surprise at the lack of social media reaction to the bone they found. The tunnel they have excavated is now about 14 metres into the hillside. There is still no cavern in sight.