The England football manager Gareth Southgate says he'll have to tone down his goal celebrations after dislocating his shoulder while having a run during a day off at the World Cup. 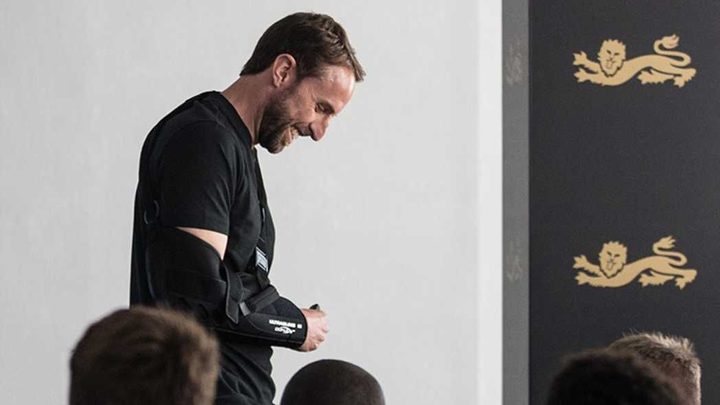 Southgate had his arm in a sling as he addressed his players at their nightly team briefing at their World Cup base in Repino alongside the Baltic coast.

"I might not be celebrating any goals as athletically in future!" Southgate told the Football Association website.

"The doc has made it clear that punching the air is not an option."

Southgate, whose team beat Tunisia 2-1 with a last-gasp Harry Kane goal in their opening game and face Panama this weekend in Group G, was treated at a nearby hospital under the supervision of the England team doctor Rob Chakraverty.

"We have a great support team and they were there very quickly," he said.

"They were supposed to be relaxing because we let the players have a bit of time off and I am causing them work."

While uncomfortable, Southgate was prepared to take it on the chin, saying it was better he was injured rather than any of his players.

"It is better this is me than one of the players," he said. "They were a bit surprised in the team meeting and were asking 'what have you been doing!?' -- as always, they were probably quite amused.

"I am just a bit gutted because I was on for my record 10k time!"