FIFA World Cup hosts Russia virtually booked their place in the second round with a 3-1 win over Egypt that moved them to top of Group A with six points from two games. 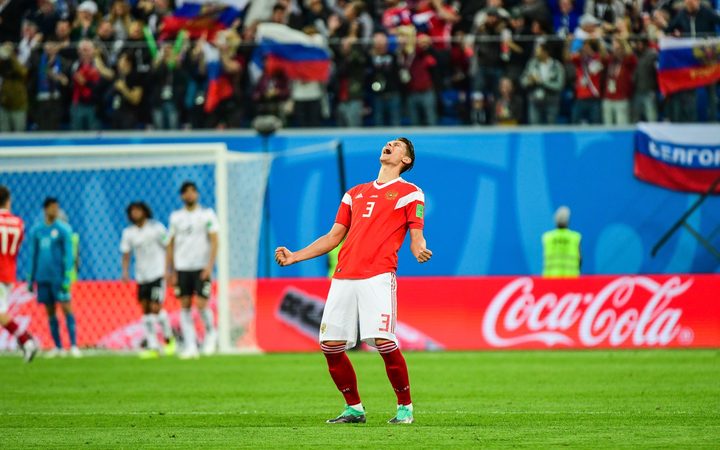 A three goal blitz in the space of 15 minutes early in the second half put the Russians firmly in command before Egypt's Mohamed Salah, who had a subdued game on his return from injury, struck from a penalty, awarded after a video review.

Should Uruguay (3 points) beat Saudi Arabia (0 points) tomorrow it will ensure the South Americans and the Russians go through to the round of 16 with a game to spare. A draw would also send the hosts through.

It is an unexpectedly positive situation for a Russian side that came into this tournament amidst scepticism and pessimism at home. After the two confident victories, with eight goals, the public appear to have taken the team to their hearts.

Far from being over-awed by the pressure on them to perform, there is a real look of confidence and at times swagger about Stanislav Cherchesov's side, who beat Saudi Arabia 5-0 in the opening game.

Egypt, whose final group game is against the Saudis, have only the slimmest of chances of staying in the tournament although they will at least be hopeful of picking up a first win in what is their third World Cup.

Hector Cuper's side looked confident given the return of their talisman Salah, but the forward was short of full sharpness and made little impact in what was a tight first half.

Senegal became the first African team to win a match at the 2018 World Cup on Tuesday when they beat Poland 2-1, helped by two shocking errors in the European side's defence.

Poland defender Thiago Cionek stuck out a leg and deflected Idrissa Gueye's wayward shot into the net in the 37th minute before goalkeeper Wojciech Szczesny rushed recklessly out of his area and allowed M'Baye Niang to nip in and score into an empty net on the hour.

Szczesny may have been caught out because Niang was having treatment on the touchline and re-entered the pitch as the ball was played backwards to the Poland goalkeeper by Grzegorz Krychowiak.

The win took Senegal top of Group H with three points, along with Japan who also beat Colombia by the same score. Colombia and Poland are both without a point.

It was a relief for Africa after Egypt, Morocco, Nigeria and Tunisia all lost their opening games.

Earlier Japan upset 10-man Colombia 2-1 in a dramatic match to become the first Asian side to beat South American opponents at the World Cup.

Asian teams had managed three draws in 17 matches against South American sides but the four-times Asian champions made their extra man count after Colombia midfielder Carlos Sanchez became the first player to get a red card in Russia.

His sending-off in the third minute, for a deliberate handball, was the second fastest in World Cup history after Uruguay's Jose Batista was dismissed after 55 seconds against Scotland in 1986.

Shinji Kagawa scored from the resulting penalty to give Japan the lead in the Group H match.

Juan Quintero's clever low free kick in the 39th minute gave Colombia the equaliser but Yuya Osako leapt above his marker to head a corner into the net for Japan's 73rd-minute winner.

With Colombia ranked 16th in the world and Japan 61st, the South Americans were expected to win.

It was also sweet revenge for Japan, who were thumped 4-1 by the same opponents in Brazil 2014, but they wasted plenty of chances to kill the game off earlier. Kagawa and Osako went close in the first half but failed to increase their lead.