Tiny Iceland made a stunning first-ever World Cup appearance when they held 2014 runners-up Argentina to a 1-1 draw in a dramatic match where Lionel Messi blew his chance to win it when he had a penalty saved by Hannes Por Halldorsson. 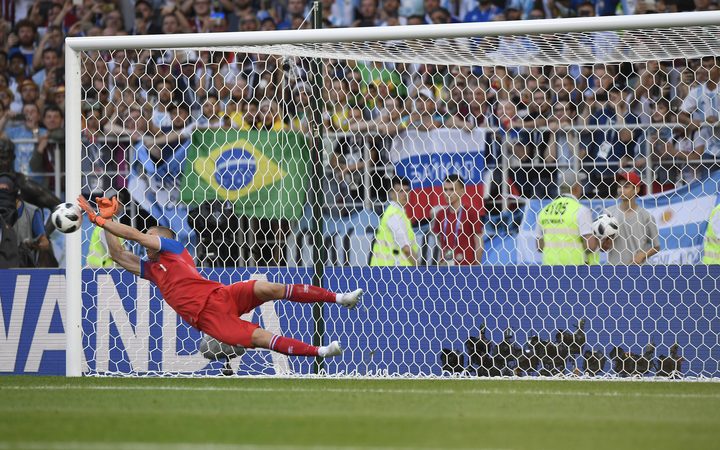 Sergio Aguero had given the twice world champions the lead after 19 minutes of the Group D match. However, Iceland, who stunned the soccer world with their run to the quarter-finals of the European Championship two years ago, showed exactly the same commitment and self-belief to hit back four minutes later through Alfred Finnbogason.

Argentina, playing in all-black and roared on by the vast majority of the crowd in the Spartak Stadium, eventually took command and delivered wave after wave of attacks in the second half. But they actually created few chances either side of Messi's poorly-struck 64th-minute penalty.

Iceland, by far the smallest country by population to appear at the World Cup, famously beat England in the last 16 of Euro 2016 and again inspired by their "thunderclapping" fans ran tirelessly and fought for everything.

Croatia beat Nigeria 2-0 with an own goal from Oghenekaro Etebo and a penalty from Luka Modric to go top of Group D, one of the toughest and most unpredictable in the tournament.

Modric's coolly taken 71st minute spot kick gave the scoreline a clear-cut feel, but the fact that Croatia failed to score on their own from open play was testament to some wayward shooting.

While dominating for long periods, they struggled to penetrate the Nigerian defence and failed repeatedly to find the target with speculative shots from well outside the penalty area.

The result puts Croatia in pole position for now after Argentina - their next opponents in the group - were unexpectedly held to a 1-1 draw by Iceland.

France needed the help of the first World Cup penalty awarded after a video review and a deflected Paul Pogba goal to get their campaign underway with a 2-1 win over Australia in Russia.

Striker Antoine Griezmann lashed home the historic spot kick in the 58th minute but Australia hit back with a penalty of their own when Samuel Umtiti inexplicably handled the ball in the box four minutes later.

Socceroos skipper Mile Jedinak sent his French counterpart Hugo Lloris the wrong way to give Australia hopes of forcing a draw at the Kazan Arena but Pogba grabbed the winner in the 81st minute.

Even that goal might not have counted in the days before technology was brought into the game with Pogba's shot looping off the shin of Aziz Behich, hitting the crossbar and bouncing down inside the goal before coming back out.

Uruguayan referee Andres Cunha checked the goal-line monitor on his watch and awarded the goal as Australia keeper Mat Ryan stood holding the ball in his hands.

Cunha had earlier watched the challenge by Josh Risdon on Griezmann on the Video Assistant Referee (VAR) monitor by the side of the pitch and decided the Australia right back had brought the French striker down in the area.

Yussuf Poulsen bounced back from conceding a penalty to score the goal that gave Denmark a hard-fought 1-0 win in their Group C clash against a Peru side who were left to rue Christian Cueva's costly spot-kick miss in the first half.

Peru started the brighter of the two sides, keeping Danish danger man Christian Eriksen under wraps for much of the first half, and they should have gone ahead just before the break when Cueva was tripped in the box by Poulsen.

Referee Bakary Gassama consulted with the VAR (video assistant referee) system before awarding the penalty but Cueva, whose nickname is "Aladdin", sent the spot kick on a magic carpet ride high over the bar.

Poulsen punished that miss in the 59th minute as Eriksen sucked in two defenders before playing him in to score what turned out to be the only goal of a pulsating, high-tempo match, despite Peru going close on several occasions late on.