Alpine plants are at risk of extinction as climate change and tourism spread weeds to higher altitudes, according to new research, and scientists say New Zealand should be worried. 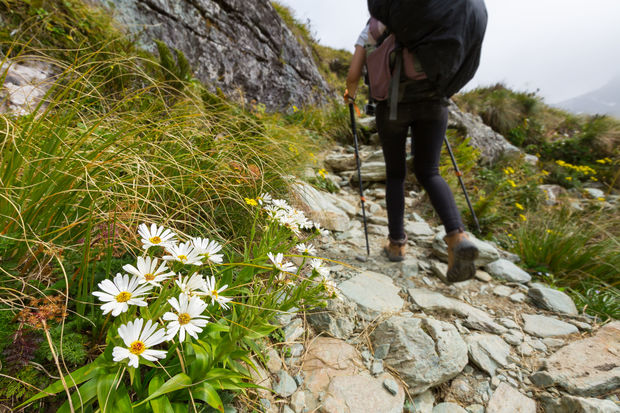 A team of international scientists, including from New Zealand, have found that as temperatures rise plants spread up mountainsides, and weeds are the fastest movers.

The research, published in Nature Climate Change, used more than 130,000 records of 1334 plant species collected over 20 years in a single region of the European Alps.

It found alien species spread to higher altitudes twice as fast as native plants in response to climate change.

Lincoln University plant biosecurity professor Philip Hulme, who was involved in the study, said while the research was conducted in Italy, it should ring alarm bells for New Zealand.

He said weeds were easily dispersed, particularly by humans.

"We have a lot of these alien plants in our lowlands, far more than in Italy, so we've got a great pool of potential species that can potentially move up mountains and so I think the risks are worth being quite concerned about."

Mr Hulme said it seemed that a lot of the alien plants would be moving up anyway, but climate change was accelerating the process.

In New Zealand the development above the tree line had been fairly limited to a few ski fields, but he said that was changing.

"Increasingly tourism is pushing to get more and more people above the tree line into those alpine environments, And it's not just trampers now: we have mountain bikers, we have four-wheel-drive clubs going up above the tree line."

He said as more pressure was put on those alpine areas, the spread of weeds would be facilitated.

The hidden costs of tourism

AUT professor of tourism and Tourism Research Institute director Simon Milne said that was another hidden cost that could be associated with tourism development, and restricting movement to some areas could be a solution.

Whether it was the spread of kauri dieback disease or weeds in the alpine systems, the same issue was at the heart of the matter - growing numbers of domestic and international visitors were acting as a vector for those kinds of introduced species, he said.

"It's just part and parcel of having an economy that is more and more dependent on both domestic and international visitors."

Mr Milne said while it was something the tourist industry needed to address, there was only so much it could do and as pressure grew and some of those environments suffered then changes would need to be made.

"Part of this will be perhaps to identify those environments where we may want to reduce or restrict visitor flows in a way that we don't currently do at the moment."

The traditional botanical surveying that used to be done was no longer as popular or as well-funded as it was in the past, which meant that as a country New Zealand was potentially missing changes in its plant communities, particularly in alpine environments.