Analysis - The Greens sign a deal that ensures they'll be there if Labour needs them in three years' time, Prime Minister Jacinda Ardern prepares to name her new cabinet and Judith Collins ponders the portfolios she'll hand out to National's caucus. 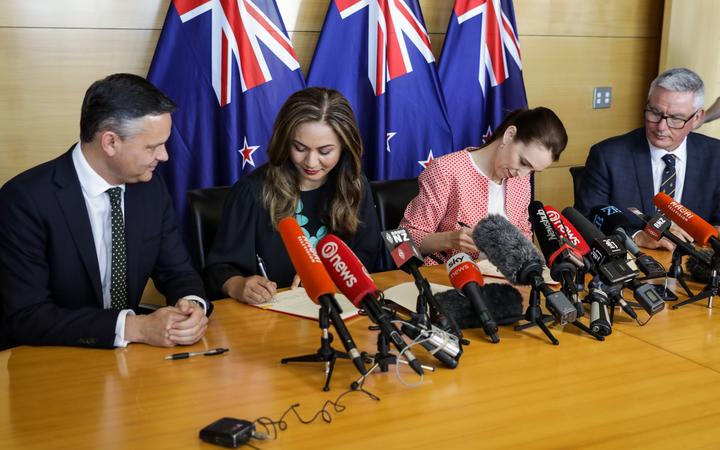 The deal that's been signed between Labour and the Greens is a neat arrangement that prevents them getting in the government's way and at the same time ensures they'll be there in three years' time when it's more than likely they'll be needed.

Prime Minister Jacinda Ardern can't expect another landslide victory in 2023 with a Labour majority, so she's made sure the Greens stay onside.

Giving co-leaders James Shaw and Marama Davidson ministerial portfolios outside cabinet means prestige, and will keep them busy without being anywhere near the levers of power.

The Greens can't oppose the government on confidence and supply votes, but they can disagree on anything outside their portfolio areas.

"We do not have to agree on issues, that means that actually if we need to get on with things, we can," Ardern said.

In other words, the government can implement its policies and pass legislation without having to ask any other party the way Labour had to when New Zealand First was a coalition partner and the Greens had a support role.

This is a co-operation agreement, not a support agreement which Labour didn't need because of its 64 seats - an outright majority in the 120-member Parliament.

Shaw will continue to be Minister of Climate Change and also become an associate environment minister.

Davidson has a newly-created portfolio. She will be Minister for the Prevention of Family and Sexual Violence, and also become an associate housing minister.

Shaw has proved himself in the climate change role, securing cross-party support for the Zero Carbon Act, and it wasn't surprising that Ardern wanted him to continue with it.

The "agree to disagree" aspect of the deal means the Greens can make as much noise as they want if they feel the government isn't moving quickly enough in other areas, such as taxation.

They can and almost certainly will argue for a wealth tax or something similar, even though Labour ruled it out during the campaign.

Party members will expect it of them. Although 85 percent of roughly 150 delegates voted in support of the agreement there were former MPs who spoke out against an agreement before the announcement was made.

Catherine Delahunty said the Greens would be better off outside the tent. "I think the Greens should go hard for independence right now and not become subsumed into any form of deal with Labour that actually mutes their ability to speak out," she told Morning Report.

Keith Locke said holding ministerial positions - he referred to them as cabinet positions, which they are not - would mean "an implicit understanding that the Green caucus would soften its criticism of the Labour government".

There will be other party members who feel the same way, but among the leadership there's obvious goodwill and the path ahead is more likely to be amicable than antagonistic.

The prime minister's next important announcement will be cabinet portfolios, which she will announce on Monday.

The most interesting decision will be who becomes the new foreign minister, a position previously held by Winston Peters. 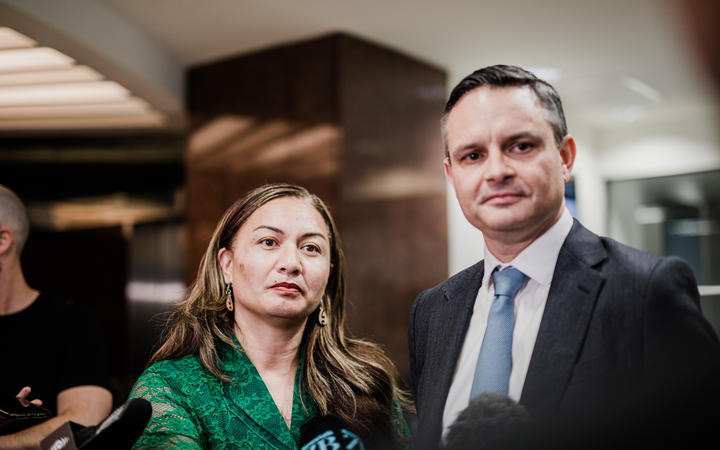 David Parker and Andrew Little are reported to be in the running and Politik's Richard Harman has tipped Little for the job.

Other intriguing questions that will be answered are what Ardern does with former health minister David Clark, if she does anything, and the portfolios and ranking of Phil Twyford, architect of the KiwiBuild debacle.

Chris Hipkins has been handling education and health but he can't do both long-term. He may stay with education, which he has held since the government came to power, and Ardern will find a new health minister.

Final election results are due to be announced on Friday 6 November, with Labour expected to gain a seat on special votes and National to lose one if previous results are anything to go by. The Greens have also benefited in previous elections and could pick up another seat.

Then the focus will shift to the opposition. National always waits for final results before holding a caucus meeting at which the leadership is put to a confidence vote. That's likely to take place the following Tuesday.

There's been no suggestion from any of National's MPs that Judith Collins will be challenged, but her deputy, Gerry Brownlee, isn't safe.

Brownlee was campaign manager and it didn't go well. Although he can't be blamed for the problems that afflicted National before the campaign began he could be blamed, in part, for the dreadful result.

He hasn't said whether he wants to stay in the role. "I want what's best for the National Party," he said when questioned.

"I've been deputy before, I've stepped aside before. Whatever is best for our caucus moving forward is obviously what I will want to facilitate."

Collins also said it was a matter for the caucus to decide, although she would be happy for Brownlee to continue to be her deputy: "He's been a great stalwart, and is a great stalwart."

Portfolios for the shrunken caucus also have to be allocated. The New Zealand Herald reported Collins last week held one-on-one meetings with her MPs to find out what they wanted and discuss their futures.

One apparent certainty is that GP Shane Reti will be National's health spokesperson, but will she keep Paul Goldsmith as the shadow finance minister? The $4 billion mistake he made in the fiscal plan he presented hindered National's campaign and was a gift to Labour.

The Herald's Claire Trevett said Collins would have to weigh up whether keeping Goldsmith in the role would make it harder for National to quickly regain credibility on the economy.

"The answer to that is yes," she said. "Every time he stands to point out a flaw in Labour's books, Finance Minister Grant Robertson will jeer `$4 billion hole'."

Trevett speculates it could be given to former leader Simon Bridges, who has extensive cabinet experience, or Todd McClay. Andrew Bayly, who was revenue spokesperson in the previous Parliament, would be another possibility, although he isn't well known.

Christopher Luxon, National's high profile newcomer, would suit the role but he's still finding his way around the corridors.

*Peter Wilson is a life member of Parliament's press gallery, has spent 22 years as NZPA's political editor and seven as parliamentary bureau chief for NZ Newswire.