Declining standards of achievement in schools against international measures set to become an issue in the education debate leading up to the 20 September election.

It seems schools, rather than early childhood and tertiary education, will be the centre of attention in the education debate. After funding, principals and teachers are most concerned about issues related to e-learning, a survey found. Photo: PHOTO NZ

National started the discussion in January by announcing its big-ticket plan to pay good teachers and principals to mentor others, prompting Labour and the Green Party to announce their education policies.

This left voters with three choices in the first half of the year - National's teachers improving teachers, the Green's health and welfare hubs for schools in poor communities, and Labour's focus on the early years.

Schools are not exactly in crisis, but there are plenty of pressure points. There is always a hunger for more funding, gaps between the achievement of rich students and poor students remain, and New Zealand children's performance has declined alongside standard international tests.

New Zealand's scores in reading, maths and science examined by the latest Programme for International Student Assessment (PISA) test in 2012 have fallen since the previous test in 2009. 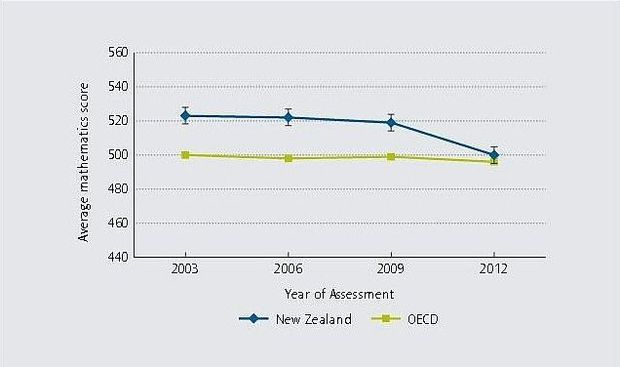 In addition, school issues have consistently been in the news in recent years. Debate continues on national standards in reading, writing and maths, the introduction of charter/partnership schools, the reorganisation of Christchurch schools, and the Novopay payroll debacle.

If these are not enough to grab voters' attention, a Council for Educational Research survey of primary school staff and parents provides a further snapshot of key issues to consider when looking at political parties' education manifestos.

Conducted last year and published earlier this year, the survey shows funding is far and away the biggest worry for principals, teachers, school trustees and parents. Teachers' and principals' next most common concerns related to e-learning, followed by a general feeling that too much is being asked of schools. Parents were more likely to be worried about keeping good teachers and about large class sizes.

More recently on teachers' radars is the Education Amendment Bill number two, which will change the Teachers' Council into the Education Council, and remove teachers' right to elect members of the organisation that registers and disciplines them. Many are angry about this and critics of the move say it will be an election issue. The abolition of higher subsidy rates in some early childhood education centres is an issue for owners and managers. Photo: PHOTO NZ

The Teachers' Council also covers teachers in the early childhood sector where there are further issues that could become election talking points.

Perhaps the biggest concern for early childhood centre owners and managers is the abolition in February 2011 of higher subsidy rates for those centres where more than 80 percent of teachers are registered. They want these rates restored because, they say, without them it is difficult to maintain staffing that consists mostly, or entirely, of qualified, registered teachers.

Also significant here are the roughly 3000 children a year who start school without any early childhood education, and the others who enter classrooms with negligible or low-quality experience.

Meanwhile, in tertiary education, institutions' performance has improved in terms of the number of students completing their courses and qualifications. But staff are complaining about increasingly difficult working conditions, and students say relentless tightening of student loan and allowance criteria are shutting more and more people out of tertiary study.

The tertiary sector is also concerned about the education bill which aims to cut the size of university and wananga councils to a maximum of 12 members and to do away with statutory guarantees of representation by staff, students and alumni. Again, critics of those changes say these matters could, and should, be election issues.

Exactly which issues will surface in the election debate remains to be seen. But with public attention already sensitised to education concerns, this sector certainly promises some heated debate.