The imminent travel bubble has brought relief for separated families, and travellers who believe they'll be safer using air travel 'green zones' than stopping off in MIQ. 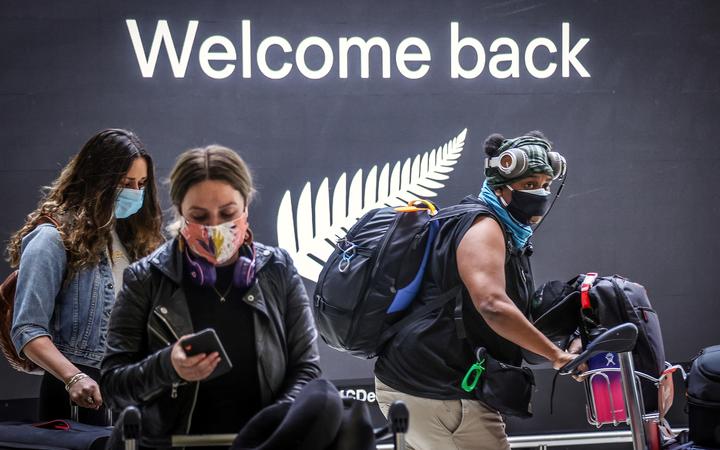 Passengers wearing masks arrive from New Zealand at Sydney International Airport on 16 October 2020 (file photo). When the travel bubble begins, travellers will be on green zone flights so they don't come into contact with people from other parts of the world. Photo: AFP / David Gray

Their feelings are backed by a leading epidemiologist, who warns the border hotels remain the biggest risk to New Zealand's Covid-free status.

Yesterday's announcement of quarantine free trans-Tasman travel starting at 11.59pm on 18 April prompted tears of joy and celebratory Zoom calls between loved ones separated by the Tasman Sea and 13 months of closed borders.

Jozina van Eck plans to be on the first flight from Cairns to Auckland to give her grandchildren a hug.

"It's been two years since I've been home. My grandkids are so big that they'll be past me - they'll be taller than me," she said.

"It's been an anxious time not knowing when I might be able to get home."

The confirmed plans were also music to the ears of Michelle Honan, a New Zealander living in Sydney.

She last visited her elderly mother on the day the country's borders closed last year and barely stepped onto the Auckland Airport tarmac before boarding a flight home later that day.

Honan already planned to visit to New Zealand next month, the earliest MIQ date she could find, and now hopes to bring it forward to see her mother this month.

"It will be good to be able to stop being a daughter by remote control and be there first hand to help her," she said.

Instead of being taken to MIQ, Honan and other travellers from Australia will be on 'green zone' flights and airport routes, so they don't come into contact with people from other parts of the world.

Green zone flights have no passengers who have come from anywhere but Australia in the previous 14 days and are flown by crew who have not been on any high-risk routes for a set period of time.

The government says travellers will need to wear masks, be prepared for random temperature checks and can't have cold or flu symptoms or be waiting on a Covid test.

Honan said it would be much better than the previous alternative.

"I was going to be at risk going through the airport that wasn't segregated and then going through your managed isolation and quarantine there, that already had its own risks with people from other countries that were higher risk than we knew we were. So this way, it keeps us safer."

Epidemiologist Nick Wilson said the risk posed by travel to and from Australia was "extremely low" compared with that of other red zone travellers going into MIQ hotels.

He thought the government could be doing more to mitigate that weakness.

"I do have a concern that we're not in New Zealand doing enough to reduce the risk from red zone countries. We've had 13 border failures since July last year. That's way too many," he said.

The bubble will free up to 1300 MIQ spaces and about 500 will be kept as contingency.

Instead of releasing the remaining rooms to people flying from other countries that might pose a higher risk, the government will look at decommissioning some hotels used by travellers from low risk countries - although it won't say specifically which ones.

Wilson said that was a good move and it could go further.

"This is a great opportunity to decommission MIQ facilities that are clearly not fit for purpose. Especially those which don't have any exercise facilities and people are being bussed around Auckland. That's a very high risk activity that shouldn't have been allowed," he said.

Ideally Wilson said all MIQ facilities would be moved outside of the main centres.

He said their current location "dramatically increases the cost to society if those places have to go into lockdown."

Economist and Covid-19 modeller Rodney Jones said reopening the borders to Australia, and making decisions around the continued use of MIQ, was the start of the long route back to normalcy.

"2021 is all about looking forward and charting a path to re-engage with the world as vaccines spread. Australia's an important step for us to take," he said.