The government is asking for feedback on whether farrowing crates should be banned or simply limited in their use. 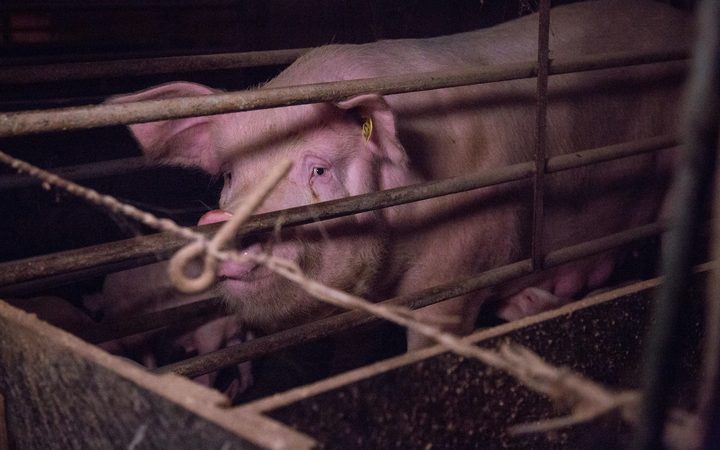 The use of farrowing crates for pigs was ruled unlawful by the High Court. Photo: Supplied / SAFE

Farrowing crates keep sows in a confined spot during the final months of their pregnancy and while they are suckling piglets.

In 2020 the High Court ruled the use for pigs unlawful and said changes need to be made to the legislation after animal welfare groups SAFE and New Zealand Animal Law Association took the Attorney-General, Minister of Agriculture and National Animal Welfare Advisory Committee to court.

The government then agreed on a five-year timeframe to phase out traditional use of farrowing crate and mating stall systems in the pork industry.

The Ministry for Primary Industries has released a new draft welfare code for pigs for consultation.

It proposes two options; the first to ban the use of the crates and the second to allow farmers to use them for a shorter period of time before and after the sow gives birth.

Industry group NZPork said the changes would result in the deaths of up to 60,000 piglets every year, require almost every indoor and outdoor pig farm to be partly or totally rebuilt and force New Zealanders to rely on imported pork produced using standards illegal in New Zealand.

"The New Zealand pork sector welcomes and encourages positive change where there are proven and well-researched animal welfare outcomes for all pigs, however this draft code lacks scientific credibility and justification.

"It imposes unachievable minimum standards on farmers and will effectively wipe out New Zealand's pig industry."

Kleiss said farrowing crates were the maternity ward for sows and were specifically designed and proven to significantly reduce the main causes of piglet deaths such as starvation, hypothermia and being accidentally crushed by the sow.

"Our calculations estimate that up to 60,000 additional piglets would die every year, depending on which of the two farrowing options is finally adopted.

"We believe that temporary confinement of the sow at a time when piglets are at their most vulnerable is a reasonable compromise when the alternative is the death of one to two piglets in every litter in a free farrowing situation."

No country has completely banned the use of farrowing crates he said.

Kleiss said the whole process with the National Animal Welfare Advisory Committee (NAWAC) had been frustrating.

"NAWAC accepted very limited input from farmers and the industry's technical advisers including NZPork's animal welfare scientist when NAWAC itself has no experience at all of pig farming.

"We're puzzled why NAWAC and the government believe it is a good idea to impose welfare standards further removed from those in most of the world while allowing pork to be imported and consumed here that is produced to standards that are currently illegal in New Zealand."

Consultation on the proposed changes closes on 24 June 2022.