Canterbury anglers will only be able to catch two sea-run salmon a season from October instead of two a day. 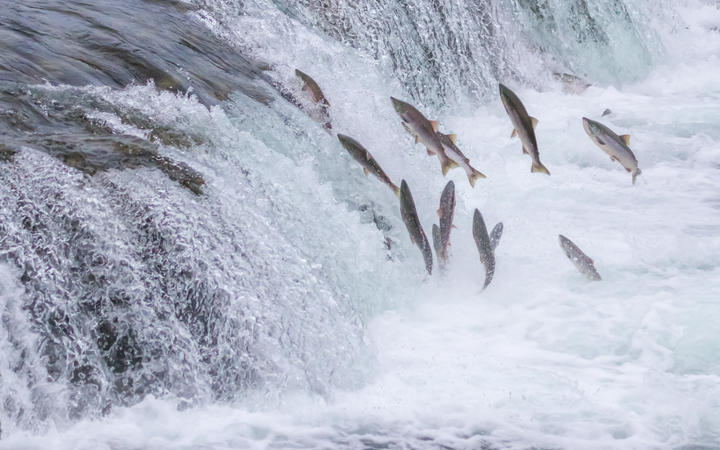 Fish and Game has introduced the new season bag limit in a bid to recover salmon stocks.

Council chair Ray Grubb said the wild sea-run salmon fishery has been in decline for over 20 years.

"Over the last 10 years, the number of salmon running to spawn has decreased dramatically. We need to take urgent action to aim for recovery of the fish stocks, as salmon are really, really important for a whole bunch of our anglers and the deterioration is not one way anyone's comfortable with."

Fish and Game had to seek regulatory change from the government to put in place a season bag limit - something that hasn't been done here before.

Grubb said, without knowing what's causing the drop in numbers, reducing the catch limit is the best option.

"We don't know what's happening to them when they go out to sea, it seems reasonable to expect there are changes occurring at sea, which is affecting the salmons ability to continue back to spawn."

He said the degradation of rivers in Canterbury is definitely having an impact on numbers.

"A lot more work needs to be done to protect spawning grounds. Habitat deterioration is a massive problem for Fish and Game across the South Island through intensive agriculture and irrigation."

He said Environment Canterbury (ECAN) needed to stand up and do more to protect salmon habitats.

Fish and Game estimated the new limit will reduce angler catch by about 35 percent which should help increase the number of fish that can spawn.

Grubb said they're not sure how long the two a season bag limit will be in place for.

The council will monitor stocks in coming seasons to see if things improve - and if they do the limit will be reviewed.

He accepted there could be a decrease in the number of anglers buying a license due to the new limit.

"If that's the case then so be it, but we need to do something to help the stock recover."

'This will be widely accepted'

He said some anglers were not happy but it was a necessary move.

"There'll be some that will complain and, that's always happened, but this has been discussed for a while now.

"There's been some talk among anglers that they should shut the fishery full stop for two or three years, so I think this will be widely accepted."

He said stocks were so low that most fishermen were only getting two or three sea-run salmon a season anyway.

Like Fish and Game, he said there needed to be a bigger focus on protecting the habitat for fish especially when it came to fish screens on irrigation takes.

"There are 900 fish screens in Canterbury and none of them are working because the river flow can be too strong or not enough, there are gaps in the mesh or they can suck the fish onto the screen and then they die.

"They're supposed to have a bypass on them which puts small fish back into the river but most of them go back onto dry river beds so then you lose the fish," Burke said.

He said the screens could cost around $100,000 for a farmer to install and were expensive to maintain.

"ECan granted the farmers 35-year water take consents in 1995 so they can't force them to upgrade their fish screens until those expire."

Burke said new screens were being developed by ECan and Niwa and would be tested in Canterbury next year.

He was hopeful the new season-bag limit alongside improvements with fish screens would allow more salmon to spawn in Canterbury rivers.