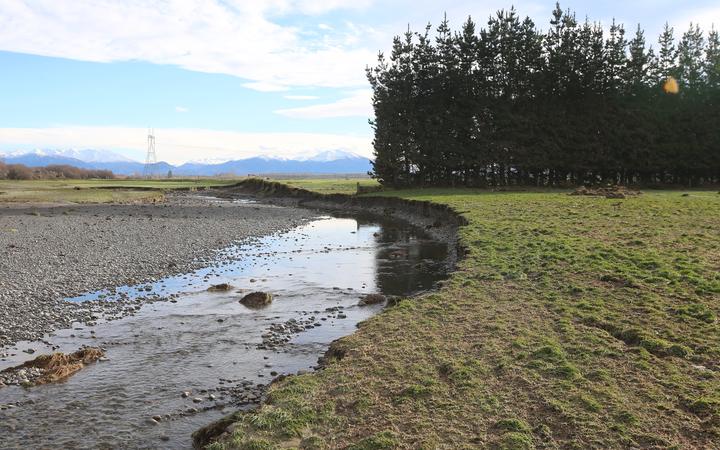 Ashburton River virtually running through the back of a family farm after the flooding in May. Photo: LDR / Adam Burns

Farmers are frustrated they've been left with huge bills to remove shingle off their farms after the river flooded. Some have been offered $3500 from the Ministry for Primary Industries.

Minutes of a council meeting in February show concerns were raised over the increasing amount of shingle in the north branch of the river - a compliance report said gravel was a serious concern and was causing flood capacity constraints.

ECAN said 60,000 cu/m of gravel needed to be removed from the river every year to maintain the flood capacity, but that figure was not met between 2009 and 2018 - gravel extraction averaged 38,000 cubic square metres annually.

ECAN's manager of rivers Leigh Griffith said the council relied on contractors removing gravel from the river for roading and building projects.

"The problem with the north branch of the river is that it's further away from town so for contractors to haul gravel from there it becomes too expensive."

It had been very challenging to generate sufficient commercial aggradation, she said.

In 2019 the Ashburton River Liaison Committee resolved to put $100,000 a year towards removing 100,000 cubic metres per year - it also waived fees for contractors wanting to take from the river.

Griffith said the committee needed full credit for being proactive and starting the process of extracting gravel as part of a maintenance programme.

The cost of simply removing and stockpiling the volume of gravel needed from the river is in the order of $300,000 a year or half the budget of the entire Ashburton rating district.

"Its a cost issue - cost is defiantly a factor the ashburton has a number of important maintenance needs including some pretty important stockbanks that support the town."

She accepted there was gravel in the river that needed to be removed but said the weather event was unprecedented.

"The Ashburton River at Mt Somers had its highest ever rainfall in 72 hours, 546mm of rain fell, which is double its previous maximum," she said.

"Twenty-four of our rain gauges across Canterbury had their highest rainfall ever, we're still crunching the numbers but this event was more than a one in 50 year event - so gravel is not the only reason water got out of that river."

There are eight to 10 crews working on the Ashburton River daily plugging holes in stop banks. They were still in recovery mode as it was still to wet to start permanent repairs.

"We will be having conversations with the community going forward and we'll be putting a business case together for central government to try and access some funding because the rebuild for that river will be millions of dollars, which is more than the budget and reserves for that river are so we need some help."