The southern hemisphere's largest agricultural event is underway - farmers are flocking to Mystery Creek, near Kirikiriroa-Hamilton, for the first physical Fieldays in two years. 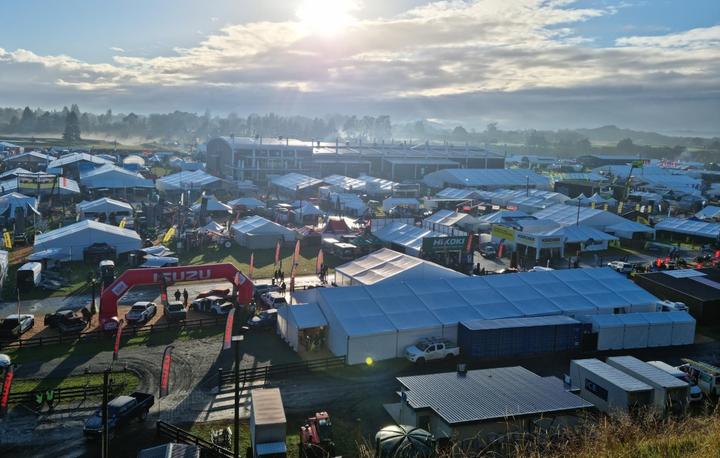 The event was cancelled last year due to Covid-19 so anticipation for this year had been high.

In 2019, nearly 130,000 people attended the event and more than $500 million was generated in sales revenue for New Zealand businesses.

More than 1000 exhibitors would put their wares on display this year.

Fieldays chief executive Peter Nation was ecstatic to have made it to opening day - even if the weather was not playing nice.

"Two years without a physical event, having to go through what Covid-19 dealt last year, and then all the work we've had to do to put this event back together. We've got new exhibitors coming and it's great to see the gates open today," Nation said.

It was a privilege to be able "to come together and reconnect" while many countries were still facing Covid-19 restrictions, he said.

Fieldays Online, launched during Covid-19 in 2020, would make a return. Last year it had 90,455 visitors and viewers from more than 75 different countries.

Nation expected sales at the event to be high, as farmers should have some extra cashflow due to high dairy payout indications and strength in most agricultural sectors.

"Generally as consumers we're seeing a lot of assets being purchased. What a lot of people have been saying is it's in lieu of travel but I think actually people are pretty happy to treat themselves after a fairly adverse year last year and renew some assets."

The Tractor and Machinery Association had seen strong sales this year, an indication the industry was in a good shape, Nation said.

However, delays for big ticket items were expected as the pandemic continued to dent the supply chain.

Govt using Fieldays as an opportunity to engage with farmers

Along with various MPs, eight ministers, including the prime minister, will attend events and make announcements at Fieldays over the next three days.

Jacinda Ardern said in a statement the primary industries had performed strongly in the headwinds of the past 12 months.

While the outlook was positive, the government recognised that significant challenges lay ahead, Ardern said.

Some of the announcements which were signalled included co-funding for a project aimed at helping farmers improve freshwater quality, the release of the Situation Outlook for report for the primary industries, and an update on rural connectivity.